Towards a Grammar of Emergency

The swiss-born artist Thomas Hirschhorn builds from the bad new days, not the good old ones, as Bertolt Brecht urged us all to do.footnote1 This is so because Hirschhorn aims to confront the present, which, in his idiom, is also to ‘agree’ with it. This is hardly to say that he approves of it; he agrees with it only in the sense that he finds most of his strategies and situations in ‘the capitalist garbage bucket’ that is our shared world.footnote2 This way of working follows an important line on the Left that insists on the resources, cultural as well as political, that lie dormant in the ‘general intellect’ of the multitude, a multitude that, to different degrees, faces a state of emergency today. Here I want only to point to a few of the concepts Hirschhorn has developed to address this condition.footnote3

Although Hirschhorn has long used the term précaire, its full significance was not always apparent. Initially the term denoted the insecure status and limited duration of his pieces, some of which, such as Travaux abandonnés and Jemand kümmert sich um meine Arbeit (both 1992), were made up of scraps of paper and board and left on the street to be picked up by others. For a while Hirschhorn merely distinguished the precarious from the ephemeral, which, as an attribute of nature more than man, did not interest him much as a strategy.footnote4 (In any case, his is not a critique of the work of art as a fixed thing, or even as a commodity; he insists, in his own ways, on such values as aesthetic autonomy and artistic universality.) Soon enough, however, the precarious came to figure less as a characteristic of his work than as a predicament of many people addressed by it, with ramifications that are ethical and political alike.

The French précaire indicates a socioeconomic insecurity that is not as evident in the English ‘precarious’; indeed, précarité is now used to describe the condition of vast numbers of labourers in neoliberal capitalism for whom employment (let alone health care, insurance or a pension) is anything but guaranteed. This ‘precariat’ is seen as a product of the post-Fordist economy, though historically, precarity might be more the rule and the Fordist promise of relative job security and union protection more the exception. It is a tricky category. What might be lost in a discursive shift from proletariat to precariat? Might the term normalize a specific condition, a ‘society of risk’, that is subject to challenge and change? Can the precariat be pried apart from its victim status and developed as a social movement? At least one thing is certain: it is not a unified class. As Gerald Raunig notes, there are ‘smooth forms of precarization’ for ‘digital bohemians’ and ‘intellos précaires’ on the one hand, and ‘rigidly repressive forms of labour discipline’ for migrants and sans papiers on the other.footnote5 This point is pertinent here, for Hirschhorn has sited some of his signal projects along this interface, not only Musée Précaire Albinet in the Aubervilliers banlieue of Paris (2004), but all three of his monuments to date—the Spinoza in the red-light district of Amsterdam (1999), the Deleuze in a mostly North African quarter of Avignon (2000), and the Bataille in a largely Turkish neighbourhood in Kassel (2002). Such projects take the form of makeshift centres of homage, contrived out of common materials like plywood, cardboard, foil and tape, where discussions, readings, performances and more casual encounters can occur. ‘Is there a way to cross from our stable, secure and safe space’, Hirschhorn asks, ‘in order to join the space of the precarious? Is it possible, by voluntarily crossing the border of this protected space, to establish new values, real values, the values of the precarious—uncertainty, instability and self-authorization?’footnote6 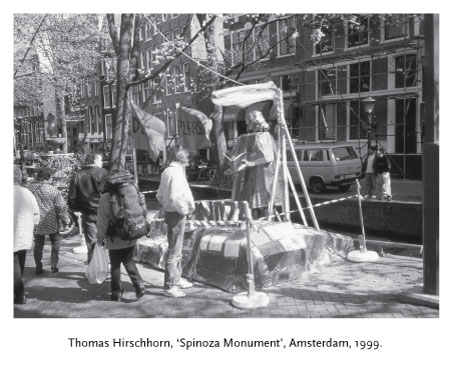 What does a practice of ‘the precarious as a real form’ entail? ‘The truth can only be touched in art with headlessness’, Hirschhorn has asserted, in ‘hazardous, contradictory and hidden encounters’.footnote7 This suggests a first principle, an actual sharing in the conditions of social risk lived by a precariat in a particular situation, and to this end Hirschhorn sometimes takes up the guise of the squatter. ‘In order to reach this moment I have to be present and I have to be awake’, he continues. ‘I have to stand up, I have to face the world, the reality, the time and I have to risk myself. That is the beauty in precariousness.’footnote8 Alert to the Deleuzian caveat about ‘the indignity of speaking for others’, Hirschhorn does not stand in place of a precariat; rather, he insists, ‘I want to engage [in] dialogue with the other without neutralizing him.’footnote9 In fact Hirschhorn does not always seek solidarity with this precariat, for such solidarity might only come of a forced union of very different parties. Against the benign community imagined by relational aesthetics, he counters with the principle of ‘Presence and Production’, which names his double commitment to be present on the site where he produces his work; and he acknowledges that the result might be antagonism with residents as much as fellowship. In this way Hirschhorn updates the argument in ‘Author as Producer’ (1934) where Benjamin finds the political use-value of a work less in its attitude or tendency than in its position or function within a mode of production.

‘Precarious’ derives ‘from the Latin precarius, obtained by entreaty, depending on the favour of another, hence uncertain, precarious, from precem, prayer’ (Oxford English Dictionary). This definition underscores that this state of insecurity is a constructed one, engineered by a regime of power on whose favour the precariat depends and which it can only petition. This means that to act out the precarious, as Hirschhorn often does, is not only to evoke its perilous and privative effects, but also to intimate how and why they are produced, and so to implicate the authority that imposes this ‘revocable tolerance’ (as his sometime collaborator, the French poet Manuel Joseph, defines précarité).footnote10 The note of entreaty lodged in the word is strong in many Hirschhorn projects, where it often carries the force of accusation as well. 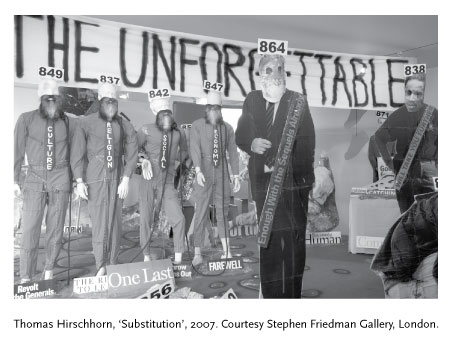 Here the political dimension of the precarious shades into the ethical. ‘To give a form to the precarious’, Hirschhorn comments, is to attest to ‘the fragility of life’, awareness of which ‘compels me to be awakened, to be present, to be attentive, to be open; it compels me to be active’.footnote11 In ‘Precarious Life’, her brief essay on Emmanuel Levinas, Judith Butler writes in a similar vein: ‘In some way we come to exist in the moment of being addressed, and something about our existence proves precarious when that address fails.’ Here Butler explores the notion of ‘the face’, which Levinas posed as the very image of ‘the extreme precariousness of the other’. ‘To respond to the face, to understand its meaning’, Butler argues, ‘means to be awake to what is precarious in another life or, rather, the precariousness of life itself’.footnote12 This is the face often put forward by the precarious art of Hirschhorn, who refuses to turn away.

In a 2003 conversation with Hirschhorn, Benjamin Buchloh begins with ‘a typical art historian’s question’: ‘Who was more important for you, Warhol or Beuys?’ To this either-or, Hirschhorn responds that he has drawn on them equally.footnote13 ‘Every man is an artist’, Beuys liked to say, and just as Hirschhorn affirms this vision of commonality, so he does the one offered by Warhol, whose painting 129 Die in Jet (1962) struck him strongly when he first saw it in 1978 (when Hirschhorn was twenty-one): ‘I felt included, immediately, included in the work of the artist, included in art.’footnote14 Later, the importance of ‘a non-exclusive public’ was underscored for him by Jacques Rancière’s The Ignorant Schoolmaster (1991), ‘with its proclamation of the equal intelligence of human beings’.footnote15 One might sum up these commitments with an anecdote about Brecht, who is reported to have kept, next to his typewriter, a little wooden donkey with this sign around its neck: ‘Even I must understand it.’