Kinshasa is a natural amphitheatre.footnote1 The older, more affluent districts of the city sit on a flat ‘stage’ of grey alluvial sand and clay next to the Congo River. Post-colonial suburbs, slums for the most part, have grown up on the red, erosion-prone soil of the ‘stands’, the ring of hills surrounding this plain. From a vantage point in downtown Kinshasa, with one’s back to the river, the arena appears to be one-sided, but you can see both sides from the hills on a clear day. Across the water stands Brazzaville, capital of the Republic of Congo. These are the closest capital cities in the world, bisected only by the great river, and located at the point of a natural gate between the Congo basin and the Atlantic Ocean.footnote2 Below Kinshasa, the Congo descends via a series of rapids, only becoming navigable again at Matadi, 600 km away. 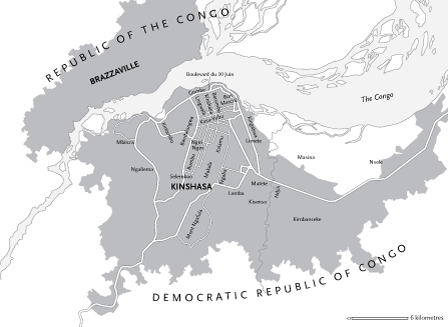 A recurring theme in the city’s history has been the failure to draw large portions of the Congo basin into its orbit. At several points—especially during the early 1960s, and after the fall of Mobutu’s regime in 1997—the state based in Kinshasa has had very limited control over much of the country, constituting just one pole among many for the evacuation of commodities to the global economy. The eastern Congolese regions became the fiefdoms of unruly barons, often theoretically commanders in the national army, who played a complex game, juggling between the various power centres. Yet however feeble its grip on the hinterland might be, Kinshasa has always retained its position as first among equals. Whoever manages to rule in the capital will be recognized as sovereign. And sovereignty grants its holder significant resources: aid and loans; rents from industrial enclaves (however feeble); a veto over who multinational capital can treat with; the power to issue passports and visas; votes to hawk at the un—all of which tip the scales for Kinshasa over its rivals. The corollary of this is that ‘national politics’ has typically meant, first and foremost, controlling the capital city. This is reflected in, and driven by, an extraordinary creative narcissism that pervades the city.footnote3 Most ‘national’ politicians have, deep down, been something smaller and more splendid—adept players on the intimate city-stage, patrons of footballers and musicians, handing out largesse to supplicants from the windows of their cars and romancing scandalous beauties; sitting in open-air bars, drinking cold beer and eating slices of catfish steamed in stock and chilli, while paying scant attention to wider conditions.

Beyond the world of formal politics, identities forged by music, religion or networks of informal economic activity have often preserved and reconfigured ideas of exchange and solidarity, allowing the Kinois to maintain a little order at the edge of the void.footnote4 Examples of this solidarity can be found everywhere in a city that has been more peaceful and better fed than its dire economic situation would lead one to expect. For much of the 2000s, levels of severe malnutrition in the city were comparatively low, in spite of major disruptions to the food supply. hiv was first identified in Kinshasa, but infection rates are lower than in surrounding countries (and much lower than in southern Africa). The city’s relatively cohesive social fabric may have contributed to this, along with the Kinois’ grown-up attitude to pleasure: the wild stories about condoms and aids that one encounters in South Africa are entirely absent here. Private gun possession is rare; insecurity has grown in recent years, but you can still walk home after dark safely in much of the city, and street-level money-changers sit calmly with thousands of dollars in plain sight.footnote5 In what follows, I will track the origins and development of Kinshasa from the pre-colonial period to its current position as one of Africa’s mega-cities, a centre of political resistance and a vibrant cultural hub, whose inhabitants have a vital role to play in the Congo’s uncertain future.

Kinshasa’s earliest settlers came for the fish and the fertile soil. The growth of the world economy in the eighteenth and nineteenth centuries prompted an upsurge of economic activity throughout central Africa, and the area where the city now stands became a huge market: the name of its chief pre-colonial inhabitants, the Bateke, derives from the verb ‘to sell’. At some points during this era, the proto-city is thought to have housed as many as 30,000 people.footnote6 By the late nineteenth century, cargoes of rubber, ivory and slaves were regularly unloaded by boatmen from upriver. Then as now, other poles of attraction drew trade away from Kinshasa: Swahili-speaking Muslim slave traders, drawing finance from as far afield as Gujarat and moving goods east towards the Indian Ocean, had established outposts covering more than half of the area that would become the modern drc.footnote7 High prices for ivory and rubber on the world market subsidized the internal transport of slaves, while the dynamics of war and trade increased the demand for dependants to work, marry or be sacrificed within the ritual economy.

The first European settlement in the area was established by Henry Morton Stanley in 1881, as part of his great mission to lay claim to the Congo on behalf of the Belgian king, Léopold ii. Stanley left the embryonic Léopoldville in the hands of his young disciple Anthony Swinburne. In 1884, Swinburne had to confront the Italian explorer Savorgnan de Brazza, acting in the name of France; Brazza was forced to confine his ambitions to the opposite bank of the river, and a vital bridgehead for Léopold’s colonization project was preserved.footnote8 Belgian officials soon took control of the growing town as the Congo Free State was inaugurated. A railway link between Léopoldville and the port at Matadi was completed in 1898, at a huge cost in human lives, removing the need for goods to be carried overland past the rapids downstream.

While the political geography of Kinshasa is still shaped by pre-colonial imperatives, its demographics mark a profound rupture with that world. Very soon after European settlement began, the former inhabitants of the area, the Teke and the Humbu, were displaced by other groups. This was accompanied by a catastrophic general fall in population throughout central Africa in the late Victorian period: sleeping sickness may have reduced the population of the lower Congo by as much as 85 per cent between 1899 and 1907.footnote9 In the early days of the colonial city, African newcomers tended to come from the Kikongo-speaking lower Congo—the area between Kinshasa and the sea—or from the forested regions upriver. Many of the latter were recruits to the force publique, Belgium’s colonial army, where a kind of Bobangi pidgin was employed as the lingua franca. This language, dubbed Lingala, became the city’s argot. This may help explain why the politics of identity, though still important, appear to be a good deal weaker in modern-day Kinshasa than in many African cities. Inter-ethnic marriage is the norm; hardly anyone claims the city as their unique ancestral terrain; and the Kinois are rarely able to speak the languages of their forebears. A slangy, French-strewn Lingala is the badge of metropolitan sophistication.

The Belgian state assumed control of Léopold’s private colony shortly before the First World War, coinciding with a gradual shift away from the murderously exploitative ‘red rubber’ period towards a more orderly system of profiteering based on the Congo’s vast mineral wealth. Léopoldville had a dual function in the colonial economy. While it was chiefly a hub for the export of primary products to the outside world, with the railways and steam boats a major source of employment for the city’s inhabitants, manufacturing for the domestic market also got off the ground, and textiles and brewing became important industries. William Lever’s Huileries du Congo Belge (hcb) combined both aspects: the company’s vast palm-oil plantations—larger than Belgium itself, and notorious for their brutality—shipped their harvest via Léopoldville, where it would be prepared for export; hcb factories also produced soap for local consumption. However, the Congo’s most valuable commodity, copper produced in the south-eastern province of Katanga, was diverted away from Kinshasa, going south instead: first through British territories in southern Africa, later via the Benguela railway to Angola. This established a development pattern whereby the Congo’s great cash cow was semi-detached from the rest of the colony, and semi-attached to the British mining complex with its heart in South Africa’s Rand, contributing greatly to the secessionist tendencies of the modern state.footnote10