Your new book, Capital in the Twenty-First Century, synthesizes the results of a deeply impressive research programme, using a comparative, long-term approach.footnote1 The results for different countries in terms of wealth distribution are remarkably uniform; they represent a challenge both to ‘convergence’ theories and to the notion that levels of inequality tend to decline over time. How do you explain the relative lack of national specificities—and to what extent can these long-run results serve to predict the future?

Capital in the twenty-first century outlines a general interpretative framework for data that has been collected by an entire team. It’s very different from my 2001 book on top incomes in France, in that it looks at some two dozen countries, instead of just one, covers a period of several centuries and considers wealth in terms of assets, as well as incomes.footnote2 The important thing about assets is that the available data allow us to take a longer view of wealth inequalities; income tax was not introduced in most Western countries until the early 20th century, so on that basis we can’t go back far enough to put the two world wars into proper perspective. Shifting the focus from income to assets, including inherited wealth, allows us to transform the investigative model and deepen the temporal framework back to the Industrial Revolution, studying the dynamics at work in the 19th century. This widening of scope would have been impossible without the help of my colleagues.

As for the similarities between countries, these need to be drawn out from the data and established in the analysis. I’ve tried to do so without overlooking national histories of wealth—for example, the role played by capital from the slave trade in the United States, the Rhineland model in Germany, or the scale of the British national debt in the 19th century, which swelled private wealth by creating financial rentiers on top of the existing land rentiers. The situation was different in France, because the national debt was settled several times and nationalization played a central role. So, each country has its own specificities and its own cultural history. National responses to inequality also depend on how the country perceives itself in relation to others. For example, the United States has often justified its domestic inequality by contrast to that of Europe. Either Europe has been seen as the land of privilege—which led to Americans imposing a confiscatory tax on top incomes in the early 20th century in order to avoid resembling old Europe, which they regarded as highly inegalitarian—or, conversely, they’ve denounced Europe’s collectivism and egalitarianism, as has happened in recent decades. Each country sees its own model as intrinsically more just.

My emphasis on certain universal laws, such as the relation between the growth rate and returns on capital, doesn’t imply any belief in absolute economic determinism—on the contrary. However, the similarities cannot be ignored. In the 20th century European states shared the experience of the two world wars. The dynamics of inequality evolved along similar lines in all of them: disparities grew rapidly during the Belle Epoque, with an unheard-of concentration of wealth, then gradually declined after 1914 due to the social transformations brought about by conflict, decolonization and the development of the welfare state. But since the 1980s they have been rising again. The countries suffered different degrees of material destruction in 1914–18 and 1939–45, but the political shocks and the burdens of war-time expenditure ultimately had similar effects on their economies. This was true of the uk, for example, which suffered less destruction than France or Germany, but nevertheless came out of the Second World War with its private wealth greatly reduced. During the trente glorieuses, this reduction in private-wealth levels led to the illusion that we had entered a new phase of capitalism—a kind of capitalism without capital, or at least without capitalists. But capitalism had not been superseded in any structural way; instead this was essentially a transitional phase of reconstruction. Wealth was restored, albeit gradually. It’s only today, in the early 21st century, that we find the same levels of wealth as in the years leading up to the First World War: around six times annual national income, as opposed to little more than twice national income in the 1950s.

National differences persist, of course; for example, in Germany the rate of valorization of capital has been lower than in France because, among other things, in the Rhineland model business ownership is divided between shareholders and employees. Yet despite this, there are still general tendencies—notably, that growth rates are lower than returns on capital, and consequently there is a tendency for inequalities to increase rather than decline. This has been the case for long periods of human history, with the exception of the 20th century (Figure 1). 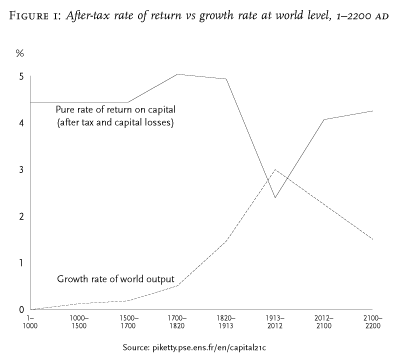 The thesis of convergence, which posits that inequality will automatically diminish as capitalism develops, has fragile theoretical and empirical foundations. It is largely based on a hypothesis formulated by Simon Kuznets in the 1950s. He observed a narrowing of income differences in the United States between 1910 and 1940; economists wanted to believe in these optimistic results and turned them into a law. In reality that reduction of inequalities owed a great deal to the world wars, but people got it into their heads that there was some universal theoretical mechanism which produced a tendency towards harmony. Another factor was that there have actually been very few historical studies of inequality, in part because of the disciplinary separation between history and economics.

I’ve aimed to give a balanced view of the dynamics in play. There are of course some forces of convergence, the most striking being the diffusion of knowledge. Currently, per capita levels of production are very similar between the advanced-capitalist countries—Europe, the United States, Japan; average annual per capita income is around €30,000 in all these countries. The differences are minimal, despite wide variations in national social models and compulsory tax rates. It’s possible that this process of convergence will continue and will include some of the emerging countries as well. But, if we look at the dynamics of wealth, there are powerful pressures towards divergence, both within countries and at the global level (Figure 2). In a world of weak growth, the fact that returns on capital are higher than growth rates tends automatically to increase inherited inequalities of wealth. 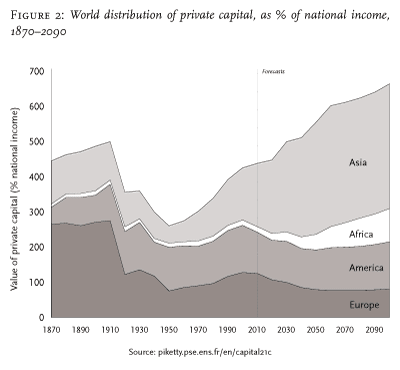