Looking at Dostoevsky’s draft manuscripts and papers, one sees how decisive planning was to him in an existential-creative sense, or even a metaphysical one: devising plans became an end in itself.footnote1 As Viktor Shklovskii put it in his Notes on Dostoevsky, ‘Fyodor Mikhailovich loved to sketch out plans, and loved even more to develop, rethink and complicate them.’ ‘He didn’t like to finish manuscripts’, Shklovskii added: ‘For Dostoevsky, the end of a novel meant the fall of another Tower of Babel.’footnote2 In the case of most writers, the published text is the sum of all the preparatory work; everything that occurred to them but which they did not end up using no longer has any significance. It is hard to find traces of the planning stage in the final version of the manuscript—indeed, removing these traces is one of the author’s aims in polishing the text, much as scaffolding is removed from a building as it nears completion. But Dostoevsky is a different matter: the plan always exceeds the work. When one looks at his manuscripts, one is struck not only by the variety of plans, but by the fact that the published manuscript is only one possible variant of the work among many. The rough drafts and working notes present a moving, living surface, dotted with holes, blanks and gaps, with a multitude of ancillary comments, qualifications, cancellations (‘crossings-out’), all competing with one another. According to one archival scholar, Dostoevsky

usually used not one but two or even several notebooks at the same time, and also often made jottings on separate sheets of paper. Even when filling up one notebook, he would not write sequentially but rather opened it and wrote on a random page, as if rushing to capture a new thought, image or situation. It did not bother Dostoevsky if a page had already been filled, he wrote wherever there was free space: in the margins, above, below or between lines, sometimes even across text he had written earlier . . . Moreover, in Dostoevsky’s manuscripts it is not always easy to establish the sequence of notes made on the same page: sometimes he started writing in the middle of the page, then sideways, then in the top corner, and between the notes we find drawings . . .footnote3

Dostoevsky himself found his way around his notes by developing a system of symbols—crosses, circles, numbers—which he placed next to his jottings to indicate the connection between them. This did not always work, however: in December 1870 Dostoevsky wrote to the critic Nikolai Strakhov that ‘I have covered so many piles of paper that I have even lost sight of my system of referencing for what I’ve written so far. At least ten times I’ve changed the entire plan and written the first part from scratch.’footnote4 A few months later he complained to Strakhov that ‘I still have not learnt to come to grips with my resources. A great many different novels and tales are crowding into one inside me, so there is no measure or harmony.’footnote5 This multiplication of possibilities was not a new experience: at the turn of 1867–68, in Geneva, Dostoevsky had written to his friend Apollon Maikov about the early stages of what became The Idiot:

I began to torment myself with the planning of a new novel. I didn’t want to carry on with the old one, not for anything. I couldn’t. From the 4th to the 18th December (New Style) inclusive I was thinking. On average, I think, I produced around six plans (no less) every day. My head was turning into a windmill. How I didn’t go mad, I don’t know.footnote6

The plan, in Dostoevsky, is endless—in contrast to the works, which cut across the plan, trying to halt its development. Planning functions rather like a kaleidoscope: a ‘re-sorting’ of what had been planned, with each turn of the mechanism’s invisible mirrors producing a new pattern. The purpose of the plan is to express as clearly as possible the work’s fundamental idea—here conceived as an ideal entity. But as the idea is developed and, with it, the forms in which it can be embodied—characters, scenes, plotlines and narrative—the plan itself constantly changes. For example, the plan for The Idiot, carefully written out and programmed with regard to characters, plotlines and so on, turns out to bear no relation to the novel which later became a canonical work. It is as if we had found in Dostoevsky’s archive several unfinished Idiots, not knowing that one of them had been recognized as a great landmark of world literature. 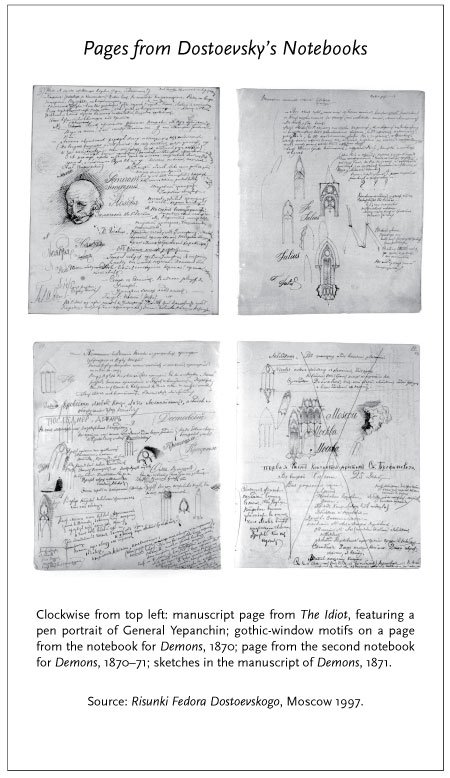 Dostoevsky himself uses several terms to refer to different kinds of plans—‘a plan’, ‘another plan’, ‘a cursory plan’, ‘a new plan’, ‘the idea for a plan’, ‘a prospectus’, ‘notes towards a plan’, and so on. The basic unit of the plan is an action; the conjunction of several such actions produces the effect of movement in the narrative. The initial plan is developed as a series of points, separate events through which the conception of the novel moves forward. Dostoevsky’s plans then follow one of two clear tendencies: extensive or intensive. They fall apart when one of the two tendencies begins to predominate. If the volume of material included in one of the scenes expands, and the overall plan needs to be modified—if not entirely reworked—then what we see is extension; this is expressed in the appearance of new characters and plotlines, requiring additional creative resources. If, on the other hand, what happens is a deepening of a particular moment, a heightening of dramatic resonance, or even a mimetic crisis (a fall, a fit, a blow), an uncontrollable outburst of emotion—which one finds everywhere in Dostoevsky—then we are dealing with intension. Dostoevsky is constantly trying to keep the sequence of events within a single observable place, but every time he fails, because actions unfold according to a logic of contingency: each action depends on the actions nearest to it, and it is the deeds of individual characters that construct the scenes. This is why it is so hard to predict the future course of events, let alone establish a hierarchy between them.

Latent within the plan are methods of construction which then crucially condition the development of the narrative. Figure 1 (opposite) reproduces a fragment of a plan for Crime and Punishment. As we can see, the plan is supposed to create the illusion of a ‘logic’, a regular sequence of completed actions. Yet there are too many actions here, and they get in the way of each other. They are not folded into the plan; rather, one action follows another, constantly requiring revision of the plan itself. Dostoevsky often lamented that he had let himself go and over-inflated his novel, introducing many unnecessary scenes, long descriptions and discussions; the deceleration or loss of rhythm this involved is all too apparent. The smallest action gives rise to a multiplicity of other actions, which are not susceptible to authorial control.