Covid, brexit, trump: last autumn offered plenty to distract world attention from the war that started on the sunny morning of 27 September. The immediate belligerents were the small Caucasian nations of Armenia and Azerbaijan, fighting over the perennially disputed territory of Nagorno Karabagh—or such at least was the standard ‘even-handed’ Western headline, lost in the stream of news. Yet Azerbaijan brought in—or was actually led by—Erdoğan’s Turkey, mobilizing low-wage Syrian jihadis along with expensive Israeli drones. Pakistan took Azerbaijan’s side, in exchange for recognition of its rights over Kashmir, and no doubt more tangible incentives. Baku’s vast arsenal, imported from Russia over the years, was supplemented by advanced ballistic missiles from Belarus and Czech heavy artillery, through shady deals involving Azeri petrodollars. The Republic of Georgia, for historical reasons never too friendly towards fellow-Christian Armenians—and deeply traumatized by the pro-Russian separatisms of its own ethnic fringes in Abkhazia and South Ossetia—proclaimed its neutrality, which in effect meant turning a blind eye to the massive transfers of military hardware and manpower from Turkey to Azerbaijan through its famed ‘east–west corridor’. Consult the map: the Caucasus mountains stand as tall as ever, constraining even the most modern forms of transportation. 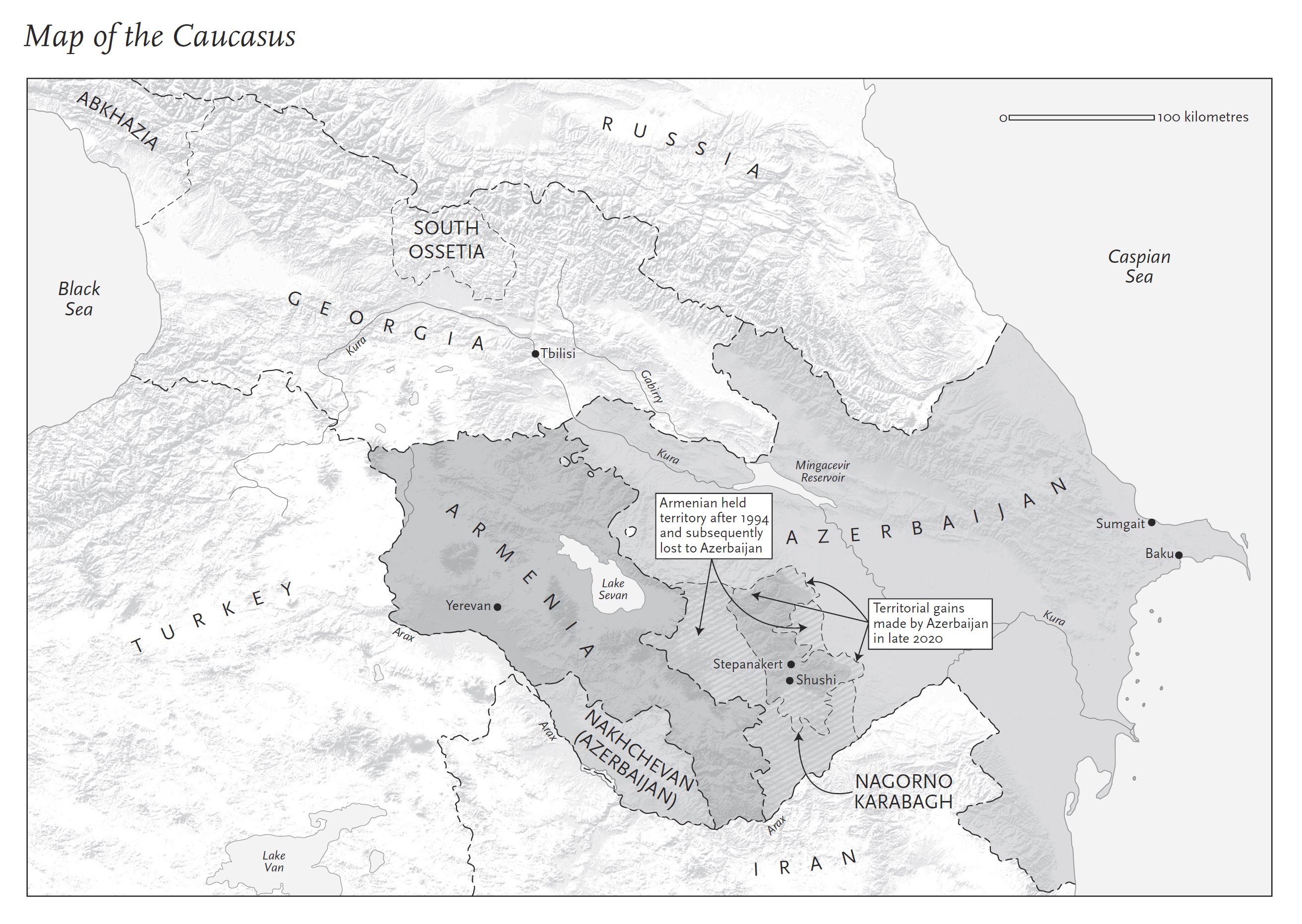 Iran, for its part, hurriedly amassed Revolutionary Guards on the south bank of the Arax River, fearing that the Azeri-Turkish offensive on the other side could provide cover for an American-Israeli attack. China, unsympathetic to any separatism, including Armenian, nevertheless monitored with some anxiety Erdoğan’s hymning of a pan-Turkic brotherhood extending across Azerbaijan and the Caspian Sea into the ‘Greater Turkestan’ of Inner Asia: where does that end—in Xinjiang, Mongolia? On the opposite flank of Eurasia, Macron was cordially advised by the irrepressible Erdoğan to consult a psychiatrist about his ‘Islamophobia disease’; traditionally pro-Armenian, France did nothing more than issue a symbolic ban on the Grey Wolves, the Turkish neo-fascist network (whose existence Ankara denies). In a parallel set of conflicts, the United Arab Emirates and Egyptian governments began squeezing out Turkish companies working in their countries in revenge for Erdoğan’s proxy advances in Libya, Iraq and Syria. The un Security Council was predictably incapacitated by a veto, purportedly that of the uk representative, either due to mi6’s long-running Turcophilia, bp’s request on behalf of its Baku partners or, in more conspiratorial minds, the Ottoman ancestry of Boris Johnson.

Last but by no means least came Russia’s intervention, after 44 days of ferocious fighting, just when the beleaguered Armenians looked doomed. On 9 November 2020, with Azerbaijani forces poised to assail Stepanakert, the enclave’s capital, Putin issued an ultimatum: if Baku did not halt operations, Russia would intervene. A few hours later, he announced a peace deal. Azerbaijan’s president, Ilham Aliyev, appeared on tv to proclaim the end of the fighting. Armenia’s prime minister, Nikol Pashinyan, had no choice but to sign off on the deal Putin had brokered. A day later, Russian ‘peacekeepers’ arrived in a spectacular airlift operation—transport aircraft, military helicopters, armoured personnel carriers, some 2,000 heavily armed troops from the 15th Motorized Rifle Brigade, bomb squads and engineers.

Turkey, Russia, Iran, Pakistan, China: at play in the 2020 battle for Nagorno Karabagh were the latter-day avatars of once-formidable Eurasian agrarian empires. To grasp what is going on in the Caucasus today, it helps to consider their back stories. At the start of the sixteenth century, contributors to a geo-political roundtable—commenting in Arabic, Chinese and maybe Church Latin—might have pointed to the gunpowder revolutions that helped seal the end of the dreadful medieval epoch and characterized the new era. Guns battered the walls of fortified cities and subdued the scourge of nomadic invasions. A whole new generation of empires could emerge, following Ming China, including three great Islamic powers: the Mughals, striving to encompass India; the Safavids’ restoration of Greater Iran; and the Ottomans, claiming the eastern Roman inheritance, who partitioned the southern Caucasus with their Safavid rivals. This was Modernity, Act One, in which Asia had a prominent role. Rising outliers like Muscovy, or the once-ferocious Burma, could also be mentioned. In the West, the Hapsburgs charted the way to the ascendancy of a commercial, bureaucratic and conservatively religious universal edifice; but the long wars of religion, improbably ending in a stalemate, helped to guarantee the sovereignty of multiple nation-states. It remained to the Westerners to put their guns and well-practiced soldiers onto ocean-going ships and recapitulate, at world scale, the pillaging and trading enterprise of the Viking era.

Modernity’s Act Two saw the rise of the industrial-capitalist European powers. To varying degrees, India, Persia and China were semi- or wholly colonized. Two sprawling empires, Russian and Turkish, leftovers from Act One, preserved footholds on the European continent. Over the nineteenth century, the Ottomans—like the Persians—would see chunks of territory hacked away. Imperial Russia, however, emerged diplomatically and militarily strengthened from its clash with Napoleon, symbolic harbinger of Act Two. Having colonized the eastern steppes, it now absorbed the lands to the south, annexing the Black Sea coast and expanding across the Persian-held khanates of the southern Caucasus, establishing its rule over present-day Armenia and Azerbaijan with the 1828 Treaty of Turkmenchay. The region constituted Tsarist Russia’s military frontier with the Ottoman Empire, which still held western Armenia. In the vortex of World War One—another extraordinary occurrence in the history of capitalism: the core of the modern world-system at the pinnacle of its power apparently went for collective suicide—the entire region would be shattered and re-forged.

The twentieth century saw the advent of Modernity’s Act Three, under the aegis of the us—a non-European world power. Continental Europe was forcefully reunified by fascism, a pathological outgrowth of colonial strategies and racist ideology, which was removed in the hugely bloody surgical procedure of World War Two. The operation was performed by continental-scale American industry, put on a war footing under what amounted to the biggest of social democracies. Most of the fighting was done by the Soviets, the military-industrial superpower built by communists in another improbable turn of world-historical proportions. After 1945, the Cold War pacified Europe at the expense of dwarfing it. The European Union evolved as a club of former empires, intent on avoiding the fate of the Italian Renaissance city-states—once-brave pioneers of a proto-capitalism that ended up in a museum.

Once again, however, the two former Eurasian empires remained outside the Euro-unification project. Both Turkey and Russia were historically European, though culturally not Western. Turkey, a nato member from the early years of the Cold War, remained perennially suspended at the threshold of European prosperity. Russia, or rather the ussr, attempted at least twice—in 1953, when the utterly cynical Lavrenty Beria attempted to steer a new course after the death of Stalin, and again in the 1980s under Gorbachev’s perestroika—to re-enter Europe on honourable terms. However, the project of a Big Europe, stretching from the Atlantic to the Urals, always begged the question of the role of America. Instead, Washington began cultivating Maoist China, as improbable (and safe) as that looked at the time. The Soviet Union collapsed of its own accord, with tiny Karabagh playing a surprisingly destructive role, as we shall see. Turkey then got its chance to profit economically and politically from the pillage of Soviet spoils. But in the main, Turkey offered itself to Europe as a kind of local China: a large pool of young, low-skilled labour, disciplined by its own variety of Asian values, and advantageously located between the continents.