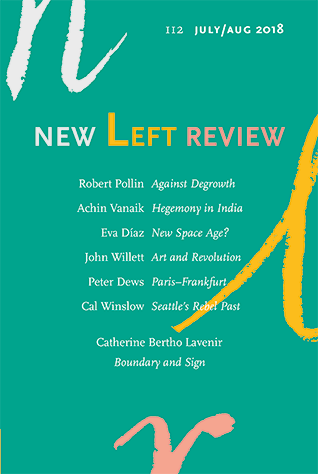 Can degrowth supply a political economy that meets environmental and egalitarian aims? In a powerful contribution to the debate initiated by Herman Daly and Benjamin Kunkel (NLR 109), Robert Pollin argues that a green-growth model offers a more viable alternative.

How to grasp what’s new in the rule of right-wing strongmen like India’s Narendra Modi? Systematic comparison of the predominance of today’s BJP with that of the Congress Party under Nehru and his descendants. Contrasts of leadership style and party organization—continuities of cow-belt base, regional chauvinism and border enforcement.

Commissioned by Eric Hobsbawm for Einaudi’s Storia del marxismo, a synoptic survey of avant-garde movements in the era of 20th-century revolutions. Disputing the received view of a series of chaotic, short-lived experiments, John Willett traces the emergence of an internally coherent cultural renaissance, stretching from Moscow and Vitebsk to Mexico City.

From boundary stone and river bank to school-room map and airport security zone: a typology of the border that relates material markers to the institutions which transmit—and enforce—their meanings.

Reflections on continental philosophy from both sides of the Rhine, tracing complex inter-relations between post-structuralism and the Frankfurt School. Problems of subjectivity and nature, social determination and individual responsibility. Philosophical contexts of critical theory—and German Idealism as laboratory for system-building and experimentalist thought.

An archaeology of the radical dreams buried under Seattle’s glass towers, the expanding footprints of Amazon and Microsoft. Reverberations of the October Revolution on the far shore of the North Pacific, as Wobblies, loggers and shipyard workers rally to the general strike of 1919.

From Buckminster Fuller to Robert Rauschenberg, visual culture was enthralled by space travel in the age of Gagarin and the Apollo moon landings. As tech billionaires lease Cape Canaveral launch pads for private-enterprise extra-terrestrial ventures, more critical takes from a range of new artists.

NLR is an independent journal which depends upon sales and subscriptions to sustain its publishing programme. If you value its work, please consider contributing.