The object of this study is one of the most ambitious projects of twentieth-century art history: Aby Warburg’s Atlas Mnemosyne, conceived in the summer of 1926—when the first mention of a Bilderatlas, or ‘atlas of images’, occurs in his journal—and truncated three years later, unfinished, by his sudden death in October 1929. Mnemosyne consisted in a series of large black panels, about 170cm by 140cm, on which were attached black-and-white photographs of paintings, sculptures, book pages, stamps, newspaper clippings, tarot cards, coins and other types of images (Figure 1). Warburg kept changing the order of the panels and the position of the images until the very end, and three main versions of the Atlas have been recorded: one from 1928 (the ‘1–43 version’, with 682 images); one from the early months of 1929, with 71 panels and 1,050 images; and the one Warburg was working on at the time of his death, also known as the ‘1–79 version’, with 63 panels and 971 images (the one we shall examine). But Warburg was planning to have more panels—possibly many morefootnote1—and there is no doubt that Mnemosyne is a dramatically unfinished and unstable object of study.

For Warburg, these thousand images were all inter-connected, and the ambition of the Atlas was to make visible—through the shock of a gigantic montage—morphological similarity across historical time. This is what the Atlas is: the meeting-point of form and history. Two concepts that are usually at odds with each other, and which he wanted to yoke together. But how exactly are we supposed to see this conjunction—how, for instance, are we supposed to read these panels: left to right, top to bottom, centre to periphery?footnote2 The size and position of individual images vary, and hence also their relevance; the captions, fully compiled only after Warburg’s death, are extremely laconic, or even cryptic; the texts he wrote for the Atlas are very few and extremely compressed—so that Gombrich was hardly wrong when, in his intellectual biography of Warburg, he compared Mnemosyne to ‘certain types of twentieth-century poetry’—he must have been thinking of Pound’s Cantos, or Eliot’s Waste Land—‘where hosts of historical or literary allusions hide and reveal layers upon layers of private meanings’.footnote3 An enigmatic work, in other words; often compared to Benjamin’s Passagenwerk, but in truth much more elusive than that. One thread through the labyrinth is however offered by Warburg’s greatest conceptual creation: the Pathosformel, or formula for (the expression of) Pathos. Passion, emotion, suffering, agitation—Pathos is a term with many (and perhaps too many) semantic shades,footnote4 though they all share the ‘superlative’ degree (Warburg’s word) of the feeling involved. ‘Antique formulas of intensified physical or psychic expression’, as he wrote in the essay on Dürer in which he introduced the notion;footnote5 an ‘external sign’ for ‘a state of excitement or inner emotion’, as the essay on Botticelli has it.footnote6 An image of the body, that simultaneously conjures up a particularly intense emotion. 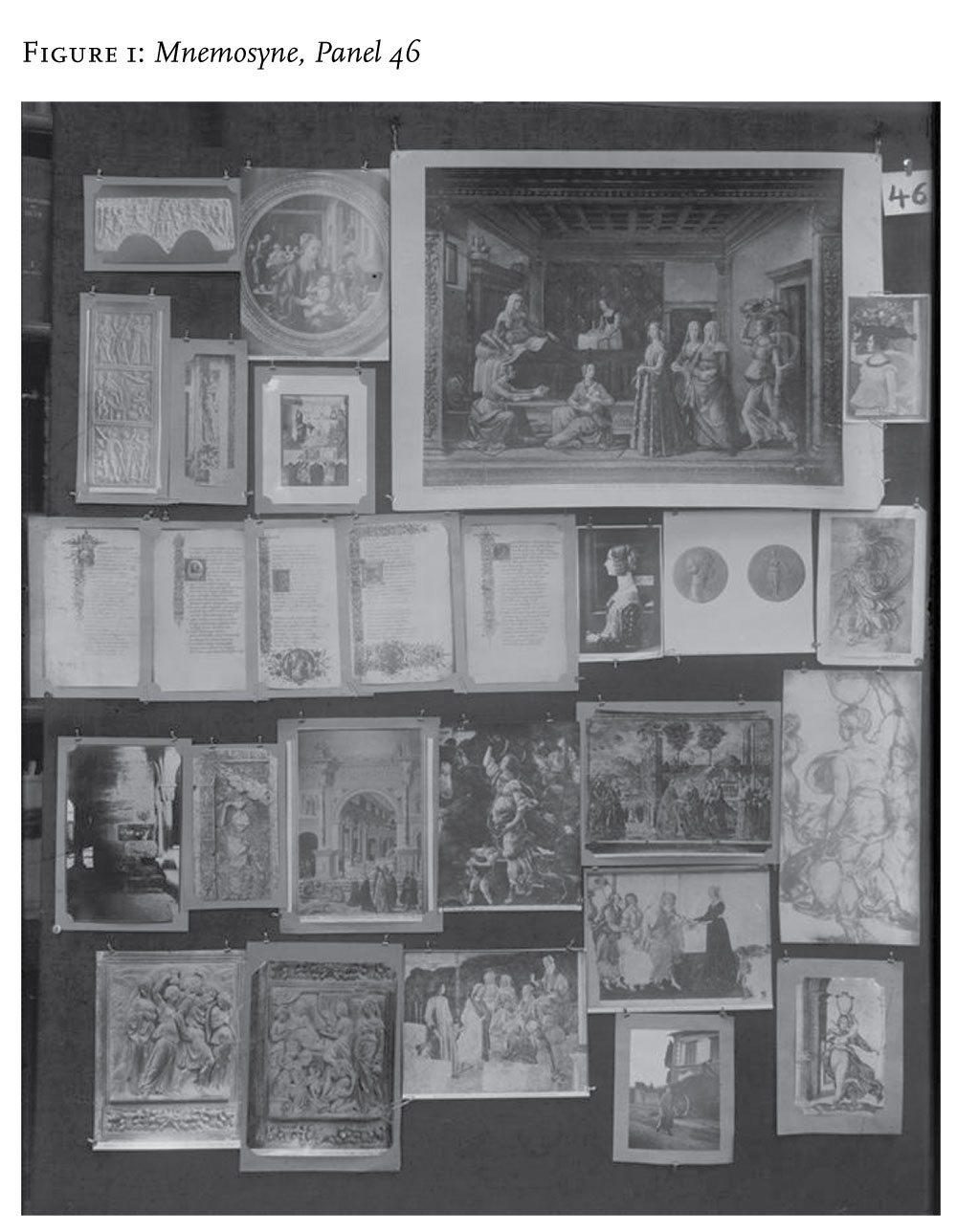 The young maid carrying a basket in Ghirlandaio’s ‘Birth of John the Baptist’ (the third image in the panel’s upper row), whom Warburg often referred to as ‘ninfa’ (‘nymph’), will be discussed later. With its 27 images, this panel is almost twice as crowded as the mean for the Atlas, which is just above 15 images. Photograph courtesy of the Warburg Institute.

A powerful concept, the Pathosformel, because it manages to combine semantic opposites.footnote7Pathos and Formel: a sudden, overpowering force—and a stable patterning which replicates itself over time, and thus enables the Nachleben (afterlife, survival, persistence: another of Warburg’s keywords) of antiquity into early modern Europe. ‘The formulas of dynamic pathos all’antica’, writes Warburg in the ‘Introduction’ to Mnemosyne, achieved an ‘overpowering hegemony’ among artistic conventions; the term returns in the annotations to panels 40 (‘infanticide . . . Excess of Pathosformel’) and 57 (‘Pathosformel in Dürer’), while Pathos is associated in various ways with Panels 41, 41a, 42, 44, 49, 52, 70 and 73. If the Bilderatlas has a centre, the Pathosformel is it.

Much excellent critical work has been done on Pathosformeln; but, as far as we know, no one has ever tried to ‘operationalize’ the concept—that is to say, to transform it into a series of quantifiable operations, thus turning it into an instrument to actually measure the objects it refers to. That the Pathosformel had clearly not been conceived with this outcome in view makes the attempt more difficult, obviously, but also more meaningful: since virtually all key concepts of art history, literary theory, aesthetics etc. pose exactly the same problem, research in quantitative cultural history must either ignore all existing concepts, which would be barbaric, or else find some way to use them to ‘measure’ reality. But speaking of ‘operationalizing a concept’ is slightly misleading, as it suggests that one gets to work on the whole concept at once, whereas in fact the first step of the process consists in breaking up the concept, to identify which of its elements are both open to quantification—because that’s the point of operationalization to begin with—but also essential to the architecture of the concept.footnote8 You want to operationalize the core of the concept, not some peripheral aspect that happens to be easy to quantify. Before any counting begins, you must really analyze the concept: take it apart, and consider the value of its various elements.

And the first thing one notices, in doing so, is how internally unbalanced the Pathosformel is. Pathos and Formel are not just semantic opposites, they also have very different conceptual weights: Pathos being much more important than Formel. Warburg’s creativity when he is writing about the former is extraordinary: in the ‘Introduction’ to Mnemosyne, which is a very short text of four or five pages, we find ‘orgiastic fervour’, ‘phobic impressions’, ‘highest inner emotion’, ‘passionate experience’, ‘pagan exaltation’, ‘boundless unleashing’, ‘interior abandon’, ‘murderous drunkenness’, ‘paroxistic fervour’, ‘resounding eloquence’—and more. This is clearly a notion that fires his imagination. Formel, not at all. So, we began our work by splitting the concept, and looking at ways to ‘measure’ Pathos.

Some secondary literature. In Pathosformeln ‘the outward movements of the whole body . . . convey inner emotion’, writes David Freedberg: ‘swaying bodies, vigorously flowing drapery, and hair flying in the breeze conveyed inner states of psychic excitation.’ The concept ‘gave art history access to [the] fundamental anthropological dimension . . . of the symptom . . . understood as movement in bodies’, adds Georges Didi-Huberman; and Philippe-Alain Michaud, in Aby Warburg and the Image in Motion: ‘it was not the motionless, well-balanced body that served as the model for the imitation of Antiquity, as in Winckelmann [but] the body caught in a play of overwhelming forces’. A ‘hysterical’ body, concludes Sigrid Schade in an essay in which one of Charcot’s patients is described as performing an ‘alphabet of passionate gestures with her body’.footnote9