West Germany since the War

Thirty years after the collapse of Hitler’s Third Reich and only ten years after Willy Brandt described the Bundesrepublik as ‘an economic giant, but a political dwarf’, Helmut Schmidt—in reply to the domestic and international criticism provoked by his remarks at the Puerto Rico summit conference in May, spelling out the sanctions which might be utilized against an eventual Communist-dominated government in Italy—can now confidently assert the new role which German capitalism is claiming for itself: ‘We cannot pretend to be a state that does not face up to its responsibilities’. His ‘indiscretion’ had in fact been only the latest in a long list of interventions by the Federal Republic into the domestic politics of its European ‘partners’: lecturing the conference of the British Labour Party before the eec referendum; publicly discussing the implications of an electoral victory of Mitterand’s Union de la Gauche for Franco-German relations; sending Brandt to Portugal to campaign for a Socialist Party already heavily subsidized by Deutschmarks. The ‘paymaster of the eec’ is certainly making its weight felt today in a manner unthinkable ten years ago. Only just behind the United States on the world export markets, the second industrial power in the capitalist world with the largest monetary reserves and trade surplus,footnote1 the increasing political self-confidence of the West German bourgeoisie is hardly surprising. But it is not just based on economics. The growing weight of the Federal Republic within the Western alliance owes much to the fact that, in a time when most other major capitalist countries are shaken by deep social and political crises, West Germany seems to remain an island of stability. Despite a deep recession with well over a million unemployed, there has been no upsurge of left-wing opposition; the Communist Party has remained insignificant and the governing Social Democrats united behind Schmidt’s right-wing policies. In fact, the pendulum is swinging to the right; leftists are being purged from public employment and from the trade unions, and the October 1976 federal elections are likely to see heavy spd (Social-Democrat) losses and possibly even the return of a cdu (Christian-Democrat) government. How is it that a country with such a rich mass socialist tradition, with one of the best-organized and most experienced working-class movements, and with a high degree of student radicalization in the late sixties, today appears to be the last stable fortress of reaction in Europe?

To put the present situation in the Bundesrepublik in historical perspective and provide a frame of reference for analysis of the key problems, the political history of the country since 1945 can be periodized into four definite stages of development: the immediate post-war period between the German Reich’s unconditional surrender in May 1945 and the establishment of the Federal Republic in 1949; the Adenauer era of uninterrupted cdu rule until 1966; the Grand Coalition which, although the cdu still provided the Federal Chancellor Kiesinger, saw the entry of the spd into government; and finally the years of social-democratic/liberal coalition government from 1969 until today.

The German state apparatus did not survive the Second World War. In contrast to 1918, the victorious allies completely occupied Germany and divided it up into four zones under military administration, with the Allied Control Council the only central authority. The future economic, social and political development of the country was entirely in the hands of the American, French, British and Soviet governments and dependent on their respective intentions and the development of relations between them. Had it not been for the antagonism between the class natures of the Western allies and the Soviet Union, it is likely that the opportunity to eliminate Germany as a serious economic, political and military rival for the foreseeable future would have been taken. The 1944 plan of us Secretary of State Henry Morgenthau to divide Germany into several separate states with predominantly agricultural economies indicated that this was an option seriously discussed in the American ruling class.

Only the break-up of the anti-Hitler coalition and the consequent Cold War created a new opening for German participation in world politics. But given the political dictatorship of the Allies, any German participation was to be strictly subordinated to the strategic interests of the two camps. The division of Germany was the natural consequence: long before the formal collapse of the four-power administration in March 1948, when the Soviet delegate Marshal Sokolovsky left the Allied Control Council, the merging of the American and British zones into a unified economic and increasingly political unit in December 1946 and the open preparations for West German participation in the European Recovery Programme (Marshall Plan) amounted to the usa giving notice of its intention to apply the Truman doctrine by creating a separate anti-communist bulwark state on German territory.footnote2

Naturally, the overriding strategic aim behind the creation of a West German state also implied careful control of the internal political evolution of the Western zones and the reconstruction of German political institutions. Dangerous left-wing developments like the inclusion of nationalization clauses in Land constitutions were vetoed; the reorganization of trade unions and political parties was subject to stringent restrictions; and after a series of strikes and demonstrations in spring 1947 the us military governor in Hesse gave an unmistakable warning on radio that ‘strikes or other activities against the policies of the military government which could in any way jeopardize the plans of the occupying power will not be tolerated . . . Do not forget that those responsible are liable even to capital punishment.’footnote3 Well before a possible spd victory in general elections and the formation of a socialist government could ‘jeopardize the plans of the occupying power’, the currency reform of June 1948 ensured the smooth restoration of a ‘free’ capitalist economic system.footnote4 The August 1949 elections for the first federal parliament took place in a situation in which the class character, the institutional set-up and the international orientation of the new republic had, short of a revolutionary insurrection, been carefully predetermined.

The results of the first five federal elections (Table 1) illustrate the continuous process of consolidation of cdu/csu hegemony. Adenauer’s and the cdu’s success in eliminating every rival party in the bourgeois camp, with the exception of the fdp, and in confining the social-democratic opposition to virtual insignificance can only be explained by the fact that, on the one hand, their programme articulated the only realistic political option for the West German bourgeoisie in the given international context and, on the other hand, the prevailing favourable (especially economic) conditions allowed Adenauer’s Realpolitik rapidly to gain credibility in the eyes not only of the bourgeoisie but also of the petty-bourgeois and large sectors of the proletarian masses. For nearly two decades, the new West German state bore the imprint of the dominance of Adenauer—the former Zentrum mayor of Cologne. 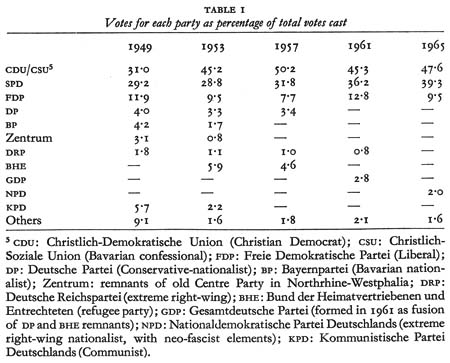 In his foreign policy, Adenauer pursued his aim of regaining full sovereignty for the West German state with a combination of unconditional subordination to Dulles’s intransigent attitude towards the workers’ states and an orientation towards Western European integration. The latter was especially necessary, in order to overcome French reservations with respect to the revival of Germany.footnote6 Even though the planned rearmament of the Federal Republic through a ‘European Defence Community’ was wrecked by a French veto in 1954, Bonn’s admission to the European Council (1950), the European Coal and Steel Community (1952) and nato (1955) were milestones in the successful application of Adenauer’s foreign political formula. Towards the East, the Hallstein Doctrine was the cornerstone of cdu policy. This postulated that Bonn, since it claimed to be the sole representative of all Germans, would not establish or maintain diplomatic relations with any government that recognized the German Democratic Republic.footnote7 Together with a refusal to recognize the realities created by the outcome of the Second World War to the east of the Oder-Neisse line (i.e. the transfer of formerly German territory to Poland) and government subsidies for the militant refugee and expellee associations, this amounted to a policy of ‘liberation’ rather than re-unification. Not surprisingly, repeated offers of German unity on the basis of neutrality made by Stalin and his successors were quickly rejected.footnote8