Current Marxist views of the relationship of imperialism to the non-socialist underdeveloped countries are that the prospects of independent economic development or independent industrialization in such countries are nil or negligible (unless they take a socialist option); and that the characteristics of backwardness, underdevelopment and dependencefootnote1 which prevent such development are the necessary results of imperialist domination. Despite the state of controversy in which the theory of imperialism currently finds itself, these conclusions were generally accepted by all participants in a recent symposium on imperialism.footnote2 It will, on the contrary, be the burden of this article that empirical observations suggest that the prospects for successful capitalist economic development (implying industrialization) of a significant number of major underdeveloped countries are quite good; that substantial progress in capitalist industrialization has already been achieved; that the period since the Second World War has been marked by a major upsurge in capitalist social relations and productive forces (especially industrialization) in the Third World; that in so far as there are obstacles to this development, they originate not in current imperialist-Third World relationships, but almost entirely from the internal contradictions of the Third World itself; that the imperialist countries’ policies and their overall impact on the Third World actually favour its industrialization; and that the ties of dependence binding the Third World to the imperialist countries have been, and are being, markedly loosened, with the consequence that the distribution of power within the capitalist world is becoming less uneven.

To avoid misunderstanding, we must state at the outset that none of this is meant to imply that imperialism has ceased to exist. It does exist as a system of inequality, domination and exploitation. What we wish to indicate are elements of change. It is a striking, if not unprecedented, irony that socialist scholars should be giving maximum attention to the phenomenon of dependence at the very time when the phenomenon itself is suffering irreversible decline. The political importance of these issues is immeasurable. In a world changing rapidly in a highly complex fashion, there is a possibility that Marxist analysis (on which Marxism’s power to change society ultimately depends) will lag seriously behind reality, that new elements in the situation will not be remarked and that the resulting distortion will decisively weaken revolutionary strategy.

Specifically, the danger is that the international relationships of class forces will be misunderstood. A crucial element in these relationships must be the success or otherwise of Third World capitalist development. Successful capitalist development is here understood as that development which provides the appropriate economic, social and political conditions for the continuing reproduction of capital, as a social system representing the highest form of commodity production. It is aspects of this development we examine below. The problem as posed in these terms differs from that posed by many authorities who analyse instead the adequacy of ‘development’ (sometimes capitalist development) as a process satisfying the needs of the masses (or ‘the problems of the nation’). Nor will this article discuss the most immediate problem which underdeveloped countries face today: the backwardness of their agriculture and its consequence: the unevenness and imbalance of their economies. All that will be attempted here will be to register, however briefly, the actuality of capitalist industrialization in the Third World and to consider some of the implications.footnote3 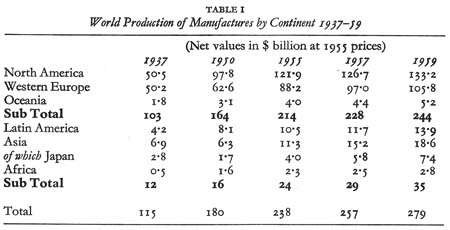 It may be argued that this apparent success is attributable to the high statistical growth rates associated with very small industrial bases and is therefore delusive, or, alternatively, that in terms of output per head the record of the underdeveloped countries compared with the developed capitalist countries is rather poor. However, inspection of the figures for individual countries over a longish period shows the ability of many underdeveloped countries to maintain faster rates of growth of manufacturing output than the already industrialized economies (table iii).footnote6 Moreover, the really unique feature of the post-war industrialization advance in the Third World taken as a whole, is its sustained momentum over a period longer than any previously recorded.footnote7 Thirdly, this industrialization has been (and is) taking place in a period when neither war nor world depression have acted to ‘cut off’ the ThirdWorld from the advanced capitalist countries—and yet it is this cutting-off that Gunder Frank considers crucial in explaining such industrial progress as has been made (in partial exception to his ‘developing underdevelopment’ and ‘increasing polarization’ theses.) footnote8 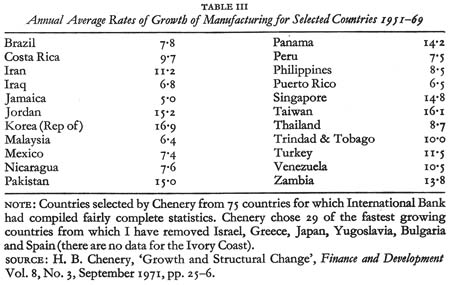 Certainly, the growth of manufacturing output per head in the underdeveloped countries does lag behind that of the imperialist world, in part because of the unprecedented post-war rates of population growth in the former. But to take the growth of manufacturing output per head as a basis of comparison is to apply an extremely demanding criterion of performance. Similarly, the same point applies to the growth of total output per head. Clearly, from the point of view of living standards, per capita growth rates are the most relevant criterion. However, from the perspectives of the distribution of world industrial power and the growth of the market (which are more relevant to the problem at hand) total, rather than per capita, growth rates are the central issue.