ASocialist revolution in India would be an event of fundamental significance to the international class struggle. An immense population of 550 million whose rural and urban masses are plunged in abysmal misery and unemployment make India one of the great potential storm-centres within world capitalism. In the last decade, it has become clear that one after another the landmarks of post-independence politics are rapidly disappearing and a turbulent and uncharted future lies ahead. The split in the Communist Party of India between the cpi (Right) and cpi (Marxist) in 1964 and the subsequent split in the cpi (Marxist) which has led to the formation of the cpi (Marxist-Leninist); the formation of United Front Governments in Kerala and West Bengal embracing both the cpi (r) and the cpi (m); the peasant revolt in the Naxalbari district of West Bengal in 1967 and the present emergence of a guerrilla movement in the Srikakulam district of Andhra Pradesh; the widespread defeat of the Congress Party in the 1967 elections and the vertical national split in the Congress Party in late 1969—this chain of developments must be judged against the economic relations and class structure of Indian society which provide their fundamental background.

In the post-independence period, the Indian Government has relied mainly on social-democratic type planning to achieve economic growth. Large areas of economic life are naturally beyond the planners’ control, and their plans have in any case mainly been concerned with preparing blueprints rather than implementing them. In effect, what goes by the name of planning are various schemes for mobilizing private and public savings to accumulate capital by taxation, monetarization and credit creation. The failure of successive plans to achieve serious growth, inflationary pressure that arose after 1964 and the bad harvests of 1965–66 led to postponement of the Fourth Five Year Plan which was to have started in 1965–66. It has been shelved ever since. The result has been that the limit of growth of per capita income has been on the average one per cent per annum. But there have been excessive fluctuations. Per capita income went down during the two famine years of 1965–66 and 1966–67. The table below summarizes the record since 1951.footnote1 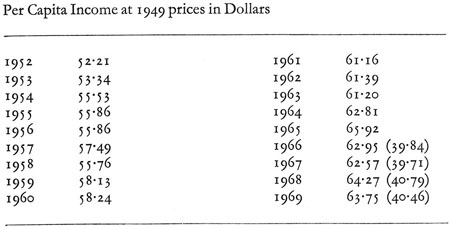 Per capita food availability started from the extremely low level of 13.5 ounces per day in 1951. Foodgrains output grew up to 1960–61, stagnated for the next three years, rose in 1964–65 and then a famine situation developed in 1965–66 and 1966–67, when output fell below 1961 figures. It is probably back to the 1961 level by now. It should always be remembered, of course, that the per capita figures hide the true abyss of poverty of the Indian masses, because of the great inequalities in the distribution of income and wealth. The food-grains record can be seen from these computations:

Growth of industrial production has been more rapid than growth of agricultural production, but has also been very uneven from one year to the next. The industrial sector at the time of independence was extremely small. In 1950–51, mines and large scale industrial enterprises employed only 2.7 per cent of the labour force, while small enterprises and railways employed 9 per cent. In the twenty years since then, the preponderance of agricultural has been reduced from 48 per cent of the Gross Domestic Product to 40 per cent.

Planning has led to the growth of a State capitalist sector, whose role to a large extent has been to build up a cost-free infra-structure for the Indian bourgeoisie by undertaking risky and expensive investments. This sector now produces steel, machine tools, heavy electrical equipment, locomotives and aircraft. There is also a state monopoly of railways, telecommunications, and some road transport. The State sector, which currently accounts for 40 per cent of all paid-up company capital, has thus created much of the heavy machine-making industry that India lacked at the time of independence.

The private industrial sector is highly concentrated. Twenty family groups controlled 29 per cent of total private capital in 1951. This had increased to 33 per cent by 1958.footnote2 In 1965, the Monopolies Commission found out that 75 leading business groups own 47 per cent of the assets of all non-Government companies. These groups are the Big Bourgeoisie in India. Their investments span trade, finance and commerce. In 1958, the two largest family groups, Tata and Birla, owned 20 per cent of total private capital stock in Indian companies. Their ownership of banks (until the recent nationalization) gave these dynasties substantial control over smaller and regional entrepreneurs. They have also been assisted by the various financial institutions set up by the Government to provide industrial capital and by the publiclyowned Life Insurance Corporation, both of which regularly invest in the companies of these groups. It should be said that its high degree of concentration is a symptom of the ultimate political weakness of the Indian Big Bourgeoisie, not its strength. For the proportion of the total economy in the capitalist sector is not a very large one. The degree of capitalization of companies in the modern sector is low: the twenty peak groups control about 1,000 companies with total share capital of Rs 3,500 million. Diversification of interests means that in each industry the monopoly power of any one group is not very high, but the existence of joint ventures and the control of banks gives these groups collective control over the economy.

If State industrial policy since the fifties has strengthened the bourgeoisie, the aim of its agrarian policy has been to promote capitalist relations in agriculture. Government credit, fertilizer and procurement programmes have always favoured the big landlord. Their goal has been to ensure a large marketable surplus for the towns by assisting the big landlords who are the main suppliers. This has meant a concentration not on increasing output of all farms, but only of those large farms which can generate a substantial surplus.footnote3 This drive has been accompanied by a growth of share-cropping and of the enormous mass of landless labourers, due partly to owners’ desire to counter landtenancy reform and partly to the slow growth of the urban sector which has swelled the number of rural unemployed.