On May 1st, 1969, Kanyu Sanyal, leader of the Naxalbari peasant movement in West Bengal, announced at a rally in Calcutta the formation of the ‘Communist Party of India (Marxist-Leninist)’. The emergence of the new party aroused torrents of criticism from all other political organizations in India. Demands were made in the Delhi Parliament to ban it. Its founders promptly went underground, while periodicals managed by their sympathizers expounded their ideas.

What is the programme of the cpi (m-l)? The Political Resolution of the party, published in its English-language periodical, Liberation, rejects constitutional agitation for parliamentary reforms and sets itself the task of uniting peasants and workers against landlords and capitalists in a revolutionary struggle aimed at the seizure of power. For the cpi (m-l), ‘India is a semi-colonial and semi-feudal country . . . The Indian State is the state of the big landlords and comprador-bureaucrat capitalists . . . Its government is a lackey of us imperialism and Soviet social-imperialism.’ The party’s Political Resolution goes on to declare that: ‘The principal contradiction in our country is between feudalism and the masses of our peasantry’. The origins of this analysis are evident: the cpi (m-l) is a Maoist formation in India. It adopts the official Chinese view that: ‘The world has entered a new era in history—the era of Chairman Mao’s thoughts,’ and claims that ‘Chairman Mao’s theory of people’s war . . . charted a new path—the path that all the people of colonial and semi-colonial countries like India must pursue to liberate themselves.’ The main immediate task of the party is seen to be the organization of landless labourers, poor peasants and exploited middle peasants in armed struggle against their oppressors. The leadership of the working-class in revolutionary struggle is not denied, but the role of the peasantry in an underdeveloped and feudal society such as India is emphaisized. The party’s programme envisages the establishment of a socialist state in two stages. In the first stage, only feudalism and imperialism are to be overthrown by armed rebellion. All peaceful methods of struggle are rejected. Bourgeois democracy is regarded with contempt by the cpi (m-l), which advocates boycott of elections.

What are the origins of Naxalism in India? Many of its active leaders were in the original Communist Party of India (cpi) from the forties onwards, and for a five-year period from 1946 to 1951 underwent a major experience of organizing the peasantry in armed struggle. The main centre of this early rebellion was Telengana (the princely state of Nizam which is now a part of Andhra), though similar actions had also taken place in parts of West Bengal, Kerala and Tanjore in North Madras. In Telengana, the advocates of armed revolt had effective control of 3,000 villages which were considered liberated areas. They defied the Central Government even after it had conducted a massive military operation to crush them in 1948. Guerrilla warfare was still in existence in 1951, when the cpi officially abandoned the struggle and ordered its militants to surrender their arms.

At the time of the Telengana struggle, there were two main groups in the cpi who opposed the rebellion. One was led by Dange and Joshi, and the other by Ranadive. In 1964, it was the Dange group which kept control of the formal cpi when the party split: it had by then become completely Muscovite in its views and policies. The Ranadive group now dominated the newly formed Communist Party of India-Marxist or cpi-m. It rejected armed struggle, however, and adopted the tactic of united fronts of progressive forces to win parliamentary elections. At first, the future Naxalites remained within the cpi-m, trying to influence its policies. In spite of much local opposition, however, the national leadership of the cpi-m concentrated its energies on parliamentary struggles. In 1965, dissension was voiced openly by Charu Mazumdarfootnote1, who called upon the party to lead peasant revolts. There ensued fierce disputes between the West Bengal State leadership of the cpi-m and its rural cadre. In May 1967, during the first term of the United Front government in West Bengal, in which the cpi-m was represented, militants of the Kisan Sabha’s (Peasants’ Association) Naxalbari branch occupied land illegally possessed by landlords, seized harvested paddy and fought the local police and landlords’ gangs with primitive weapons. There were casualties on both sides. Hare Krishna Konar, the Kisan Sabha’s Secretary and Land Revenue Minister in the United Front government, tried to appease the local cadres. But on the question of armed struggle no compromise proved possible. The West Bengal cpi-m,pressured by its partners to maintain ‘Law and Order’, in June 1967 expelled 19 party members, including Sushital Roy Chowdhury, a member of the State Committee. A rapidly growing element within the party rallied to the dissidents. The Naxalbari group was born.

The establishment of a Maoist group in West Bengal put the State’s cpi-m in a dilemma. It had to satisfy its anti-Chinese and reformist allies in the United Front goverment, who clamoured for the suppression of the Naxalites. On the other hand, many of the party’s workers, especially in the rural areas, were very sympathetic to the anti-feudal activities of the Naxalites, so that direct suppression was inexpedient. Faced with this dilemma, the party’s leadership followed contradictory policies. It allowed the Naxalites to publish and distribute party literature, and to hold meetings and demonstrations, but simultaneously attempted to break up the meetings, by using ‘volunteers’. In competition with Naxalites, the Kisan Sabha in West Bengal undertook many militant actions such as forcible seizure of harvests, while resisting similar actions undertaken by the Naxalites. Some of the prominent Naxalites were freed from custody, while many guerilla leaders were arrested under the Preventive Detention Act.footnote2 Some party leaders called Naxalites ‘infantile adventurists’, while Hare Krishna Konar was reported by the Statesman to have described them as ‘bandits who should be suppressed by setting up police camps’. The complex outcome has been a great deal of energy wasted in mutual fighting; a massive defection of Kisan Sabha’s rank and file members to join the Naxalites; and the spread of a large-scale militant movement in the agricultural sector in West Bengal.

To date, Naxalite activity has been reported in the following States: Andhra Pradesh, Bihar, Kerala, Maharashtra, Mysore, Orissa, Punjab, Tamilnadu, Uttar Pradesh and West Bengal. The list, however, needs careful scrutiny. In no case are all the districts of the State in question affected. Even where a district is reported to have a Naxalite cell, the quality of its activity often differs widely . Some attempt can, however, be made to assess these local struggles. 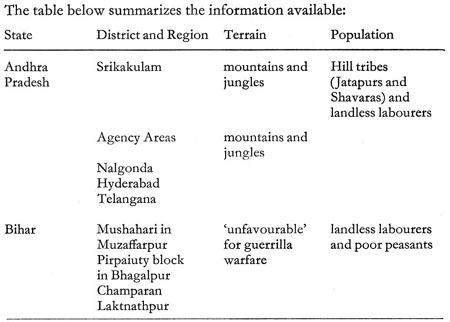 From this limited information some trends emerge. Firstly, the strongest backing for the Naxalites comes from (i) tribal people—Adivasis (‘natives’) or Girigans (ii) scheduled castes. Both these groups suffer not only from economic exploitation but also from social ostracism within Hindu society. The tribal peoples are largely Dravidians, who formed the population of India before the Aryan invasion and occupation. They were driven to the South and took to the hills and jungles for survival. There they preserved their ancient tribal culture to this day, always fighting the settlers in the valleys. The scheduled castes are the lowest rank of Hindus who are considered untouchable. The position of both these groups in a Hindu society is hopeless. Their only chance is rebellion. They have often taken to armed struggles in the past, although not always under political leadership.