World Capitalism in the Eighties

The main currents of thought on world economic problems can be distinguished from one another, amongst other things, by the precise importance they attach to the national dimension. For neo-classicists, as well as for supporters of the ‘globalist’ ideology propagated by the multinationals and transmitted by the communications media, there is a one-way process of the unification of economic relations. The absolute primacy accorded to the private subject over all forms of collective organization encourages a view of the nation as a mere historical remnant. Spatial heterogeneity is conceived as exogenous to the impulse towards the realization of a general market equilibrium: i.e., as an initial disposition of resources not chosen by economic subjects or as an obstacle to trade in the factors or products of production. Indeed, the neo-classical theory of international relations is nothing other than a theory of the tendential dissolution of this spatial heterogeneity and its replacement by the homogeneous space of ‘pure’ market relations on a world scale.

This article starts from different premisses. In contrast to the neo-classical démarche, it bases itself on the primacy of the national dimension and regards the world economy as a system of interacting national social formations. Always alive amongst French economists, Marxist and non-Marxist, this approach focuses more on historical studies and upon the uneven influences which nations exert upon one another. Its aims are to elucidate the conditions through which one nation exercises hegemony over others, to show why such hegemony is a cohesive principle in international relations, to analyse the reasons for the decline of hegemonies, and to link this with the recurrent crises affecting international relations in general.

The theoretical salience of the nation-state in economic analysis is often equated exclusively with mercantilist or physiocratic doctrines; in fact, it is also part and parcel of the classical tradition. For example, Ricardo’s analysis of international relations takes as its starting point the proposition that the formation of value under capitalism occurs within nationally specific conditions. He therefore argued that each country has a distinctive basket of goods which comprise the real wage, as well as characteristic difficulties in producing the wage-goods upon which the rate of profit depends. Market mechanisms are not automatically capable of effacing, even in the long-run, these national specificities. Economic history has ratified the general validity of this theoretical position by showing that there is no long-term trend for international relations to be harmonized through the homogenization of national economies and the equalization of growth rates. Indeed, epochs of rapidly expanding world trade and relative monetary stability coincide with the persistence of national differentiations. Far from indicating the success of a unifying tendency among national economies, convergences in conditions of production usually tend to fuel masked or violent rivalries whose outcome is not determined in advance. It is this uncertainty which allows us to speak of crisis in the strong sense of the term.

The conception of the world economy inspiring this article emphasizes this dimension of recurrent disequilibrium and the accumulation of tensions that derive from the ultimate incompatibility of national modes of regulation. Hegemony is seen as the principal form of cohesion within a system of nations; and hierarchy, dynamically understood, is considered to strengthen the stability of a complex, open system. These are presuppositions of a series of theoretical schemas which attempt to explain the roots of postwar us hegemony, the associated forms of macroeconomic adjustment, the factors of instability that appeared in the 1970s, and the new conjuncture that established itself at the beginning of the 1980s. Finally, in a more speculative vein, I consider whether the seeds of a new reorganization of the capitalist world economy can be detected and compare several hypothetical scenarios of the course that the crisis may yet take.

In this section we shall try to identify the international conditions which underpinned the regularities of Western growth from the Korean War to the end of the sixties. First we must raise the question of the existence of a system of international economic ‘regulation’. That is, can we speak of international institutions—or of procedures tacitly recognized by the leading capitalist states—which give a precise form to international monetary constraints and therefore influence the kind of adjustment made to changes in the balance of payments? Moreover, are the forms of international monetary regulation structurally correlated with underlying tendencies of accumulation in the heartlands of the world economy: with extensive or intensive accumulation, with a relative orientation to internal or external markets, with reliance upon vertical or horizontal international divisions of labour, and so on? A historical, comparative approach is the most fruitful way of tackling these questions, and it is helpful to make a summary comparison between the postwar system of growth under American hegemony with the previous system that blossomed under British hegemony in the second half of the nineteenth century. Synoptic Table I sets out the major structural differences between the two types of regulation; relating these differences to specific divisions of labour and forms of the internationalization of capital as well as enunciating the principal characteristic articulations of the international economy in each type of regulation. 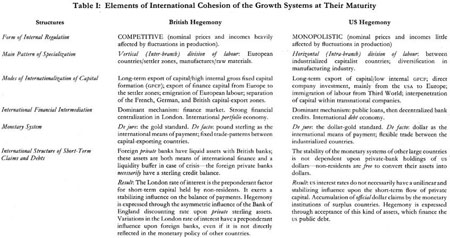 The table reveals that the respective principles of international macroeconomic interaction within each hegemony are fundamentally opposite in character. The two most crucial differences are:

(a) The opposition between the macroeconomic adjustments typical of competitive regulation and monopolistic regulation in the dominant economies, with regard to relations both between prices and nominal wages, and between production and employment. The main line of differentiation within the productive sector is also very different. In competitive regulation it separates agriculture from industry. The rhythm of industrial growth here critically depends upon a relative decline in the prices of agricultural goods sold to the proletariat of industrial regions. The degree of agricultural protectionism is a key factor in national structure-preferences and determines the size of rents. These rents, however, produce a high level of savings, which, according to the country, are either garnered by the merchant banks and placed in the circuits of international finance or else received by the institutions financing national industry and boosting its export production capacity. In this way, the industrial or financial valorization of capital is oriented towards international trade.