The Value Controversy and Social Research

Debates on the labour theory of value are usually waged at the most abstract levels of theoretical discourse.footnote＊ Frequently these debates are preoccupied with questions of the appropriate methodological stance toward social analysis, epistemological disputes about what it means to ‘explain’ a social process, and mathematical arguments about the merits of competing ways of formally deriving certain categories from others. Rarely are the issues posed in terms of their implications for the concrete investigations of social life in which social scientists would engage. This will be the central theme of this essay: the implications of the labour theory of value and its critiques for empirical investigation. In order to keep the discussion as focused as possible, I will organize the analysis primarily around one central aspect of the labour theory of value—its account of the determination of profits in capitalist societies.footnote1 In some ways this is not the most basic issue within the debates over the labour theory of value, since analysis of the determinants of profits presupposes the debates over the relationship of embodied labour times (values) to prices of commodities. Nevertheless, since the analysis of profits plays such a central role in Marxist theory as a whole, and since it has particularly important immediate empirical implications, we will centre our discussion on this particular issue.

One of the difficulties in embarking on an assessment of the empirical implications of theoretical alternatives is that, typically, each of the alternative positions characterizes the debate itself in different ways. The preliminary task of this paper, therefore, will be to translate each of the positions in the debates on the labour theory of value onto a common conceptual terrain, so that it will be possible to assess their empirical implications in terms of a common framework. Such an act of translation cannot be ‘innocent,’ to use a favourite expression of Louis Althusser, but to a greater or lesser extent must presuppose one of the theoretical stances in the debate. In this essay, the evaluation and elaboration of each of the positions will be from the vantage point of the Marxist labour theory of value itself.

In the following section, I shall present a brief exposition of three perspectives on the determination of profits: a ‘causal–agnostic’ account as developed in the work of Anthony Cutler, Barry Hindess, Paul Hirst, and Athar Hussain;footnote2 the ‘Sraffian’ account as elaborated in the work of Ian Steedman;footnote3 and a reconstructed version of the traditional Marxist account based on the labour theory of value. In each case I shall present a substantive model of determination of profits rather than try to elaborate all of the technical details of the theoretical position. Following this exposition, we will consider the implications of each model for the kinds of questions one would ask in an empirical study. This analysis will then be illustrated by a discussion of the relationship of recent research on the nature of the labour process to the labour process to the labour theory of value.

The analysis which follows should be seen more as attempting to redefine in certain critical ways the terms of the debate rather than definitively resolving all of the points in dispute.footnote4 In a sense, therefore, I am trying to pose an alternative agenda of theoretical (and empirical) research, and in so doing to establish more systematically the conditions for the adequacy (or inadequacy) of the labour theory of value. In various places I will point out where unresolved questions remain which need to be addressed.

With these limitations in mind, let us now turn to the exposition of alternative accounts.

Although, in terms of historical development, the Marxist model of determination of profits is the earliest of the three we will consider, presentation of the different positions is made easier by discussing first the conceptually simplest model, the causal–agnostic account of profits, and then turning to the Sraffian and Marxist perspectives.

In order for profits to be produced in a capitalist society, many necessary conditions must occur. Capitalists must organize their investments and financial transactions, means of production must be combined with labour within the production process, the weather and geological conditions must fall within certain definable limits, and so on. All of these are necessary conditions in the specific sense that if they vary outside certain limits, no profits will be possible. If the weather produces horrendous flooding, or if geological conditions produce massive earthquakes, for example, profits will not be produced. A similar argument can be made about capitalists’ actions, technological processes, labour, and many other factors. Of course, not all necessary conditions can be thought of as real determinants of profits. Without oxygen on the planet, for example, profits would be impossible, and thus the existence of oxygen is a necessary condition for profits to occur. Only those necessary conditions which have ‘pertinent effects’, that is, whose range of variation in the world generates real effects on profits, can be considered theoretically relevant necessary conditions. Given that all such pertinent necessary conditions have real effects, so the causal–agnostic argument runs, it is arbitrary to raise any of them to the privileged status of the ‘essential’ cause of profits, or as Marxists typically put it, the ‘origin’ of profits. 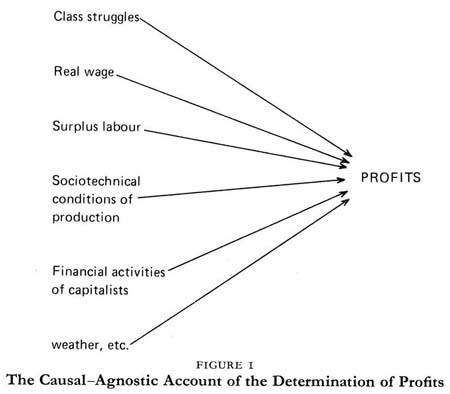