From Contradiction to Catastrophe

The constitutive claim of historical materialism, of the materialist conception of history, consists in giving an explanatory primacy to a social formation’s ‘material structure’—i.e. to its productive forces (over its relationships of production), to its economic base (over its superstructure). The central difficulties of historical materialism consist in reconciling this claim with (1) the idea that ‘non-material’ structures play a significant role, (2) the idea that history is an (objectively) ‘goal-directed’ process, and (3) the idea that political action may play a decisive role. These three difficulties I shall call (1) the ‘primacy puzzle’, (2) the ‘paradox of teleology’ and (3) the ‘riddle of historical determinism’.

Among modern attempts to rephrase or reconstruct historical materialism in such a way that these difficulties can be solved, Althusser’s Marxism has undoubtedly been, by far, the most influential and also, apparently, the most rigorous. Unfortunately, the concepts it has used in this attempt—e.g. ‘determination in the last instance’, ‘dominance’, ‘overdetermination’—are so muddled and confusing, that they seem much more useful for dodging the issue than for shedding light on it.

In this brief article,footnote1 I should like, with the help of very simple formal tools, to sketch an alternative to the Althusserian attempt to resolve these questions. I shall start with a reformulation of the materialist claim and then, by progressively enriching the basic model, show how the three difficulties mentioned above can be dealt with, without unnecessary obscurity or ad-hoquery.

The two central propositions of historical materialism state that, in spite of possibly considerable time lags, there is a necessary tendency towards correspondence, (or non-contradiction) on the one hand between the level of development of the productive forces and the nature of the relationships of production, and on the other hand between the economic base and the (legal-political and ideological) superstructure.footnote2

What these laws of correspondence mean is, first, that not all combinations of material structures (productive forces, economic base) and non-material structures (relationships of production, superstructure) are, if not possible, at least viable—i.e. that only some of the logically possible combinations constitute stable equilibrium states (or attractors) of the social system.footnote3 But the laws of correspondence are more than just equilibrium laws, in which the two dimensions (the material one and the non-material one) could play symmetric roles. Also implied in them—and this is what makes them the core of historical materialism, of a materialist theory of history—is the claim that, whenever there is contradiction, i.e. non-correspondence, between the two dimensions, the non-material structure (relationships of production, superstructure) adjusts to the material one (productive forces, economic base), and not the other way round. This fundamental asymmetry between the two dimensions we can call the primacy of the material structures. 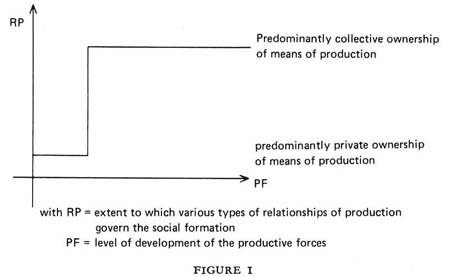 What historical materialism amounts to claiming, in this particular case, is, first, that the curve in this diagram represents the set of stable equilibrium states (or attractors) of a social formation’s mode of production, and, secondly, that the dynamics which leads to this curve is ‘vertical’. The first point simply means that, if the mode of production happens to be at a point of the surface (which represents all logically possible combinations of rp and pf) which is not on the curve, it will tend to move towards the latter. The second point means that this movement will occur along vertical lines or, in other words, that from an initial position of contradiction between productive forces and relationships of production (i.e. from a point of the surface which is not on the curve), the mode of production will move towards correspondence by adjusting the level of rp (i.e. by an institutional change which privatizes or collectivizes the means of production), not by adjusting the level of pf (i.e. by increasing or decreasing the level of development of the productive forces). If the dynamics was ‘horizontal’ instead of ‘vertical’, correspondence would be restored by adjusting pf, not rp, and there would be a primacy of the ‘non-material’ relationships of production, not of the ‘material’ productive forces.