On 27 April 1978 the world heard that there had been a successful military coup in Afghanistan. The régime headed by Mohammad Daud, which had itself come to power through a coup in July 1973, had been suddenly overthrown by tanks and jet planes that struck in the Afghan capital, Kabul. At first it seemed as if this was yet another military intervention which, although violent and abrupt, involved no major shift in the policies, social character or international alignment of those in power: a change comparable to Daud’s own coup, or to others in neighbouring Pakistan, Bangladesh, and the Arab world. Yet within days it became clear that the announcements of radical change coming over Radio Kabul were more than just the ritual demagogy of military coups: something rather more substantial had occurred.

In the first place, the coup, although carried out by the military, reflected much wider political forces. It had been preceded by mass popular demonstrations in Kabul, and as thousands of people flocked to inspect Daud’s conquered palace, now renamed the House of the People, it became evident that it had ousted a hated régime and at least temporarily embodied the hopes of a wide section of the population. At the same time it became clear that the coup was not just the product of a conspiracy within the military, but had been carried out on the instructions of an underground Marxist political organization whose membership was overwhelmingly civilian. This at once distinguished the new rulers from other radical military régimes in the Arab world, South Asia or Ethiopia. Moreover, it was this civilian organization, the People’s Democratic Party of Afghanistan (pdpa), about which the rest of the world had previously been quite ignorant, that quickly established its predominance with a new government, headed by Nur Mohammad Taraki. The novel character of the new régime soon became even more apparent. It committed itself to land reform, to equality of the nationalities, to emancipating women, to a solution of the nomadic question. So it was that at a time and in a place suspected by few, and in a country renowned only for colonial war and narcotic plenitude, a revolutionary process of some description had begun.

However surprising the events of April, it has not taken long for the international response to assume its form. The ussr and its allies have moved with considerable decision to support the new régime, and the Soviet commitment to the pdpa has been made abundantly clear. Reactions elsewhere have been predictably hostile. The usa was, it has been reported, caught unawares by the pdpa’s seizure of power, although its Iranian clients in savak were not.footnote1 For years the Americans had relied on an equilibrium with the Soviet Union in Afghanistan: focusing short-sightedly on the strategic aspect alone of their policies, they ignored the unfolding social dynamic within Afghanistan itself and complacently expected the corrupt tribal régime to continue for the indefinite future. Within weeks, however, the us government was waging a propaganda offensive against what it again construed in uniquely strategic terms as a Soviet advance in Afghanistan—comparable to Angola and Ethiopia—and a conference of 270 us experts met under nato auspices in Annapolis to reflect upon this new development. Referring back to Kipling’s description of Anglo-Russian rivalry in Afghanistan as ‘The Great Game’, one American strategic expert declared: ‘The “Great Game” is over and the Russians have won it’.footnote2

Alarm of equal magnitude has been manifest in three of Afghanistan’s neighbours—Pakistan, Iran and China. Afghanistan has long played a major role in Pakistani politics, by claiming to champion the cause of the six million Pushtuns or Pathans who live in north-west Pakistan and to a lesser extent the three million Baluchis in the west of the country.footnote3 A militant government in Afghanistan is seen as posing a threat to Islamabad’s control of these territories, and hence to the survival of the Pakistani junta itself, still struggling to restabilize the country after the overthrow of Bhutto. In Iran, where twenty-five years of political oppression have now been answered by a massive popular upsurge, the dramatic appearance on the country’s eastern flank of the pdpa government has provoked great concern. Iranian determination to oust the latter, if the opportunity arises, cannot be doubted. Finally the Chinese, loath to see any Soviet advance and particularly one menacing Chairman Hua’s friends in Pakistan and Iran, have reacted coolly to the new Afghan government. Peking waited two weeks before according recognition, and Chinese diplomats have since April been co-ordinating an anti-Afghan policy in Tehran and Islamabad.

The new régime therefore finds itself caught in a precarious international situation. Faced with the hostility of its three other neighbours, it is reliant to a considerable extent on the Soviet Union—with only India, a traditional ally, providing an alternative source of support. Moreover, these external pressures interlock with numerous and profound internal difficulties. For whilst the pdpa is revolutionary in intention and whilst Afghanistan is desperately in need of social transformation, the new régime is boxed in by daunting problems. Its own organization of a few thousand cadres has an almost totally urban base, in a country where ninety per cent of the population live in the countryside. Despite the popular character of the upheaval in Kabul itself, the advent to power reflected a nation-wide crisis only in the sense that the previous régime had been decomposing under the impact of Afghanistan’s many contradictions. The mobilization of the mass of the Afghan oppressed has only just begun. The relations between civilian and military appear to be vexed, and to this is added the fact that the pdpa itself is riven by a dangerous factionalism.

However, whatever the disunity inside the pdpa, it pales before that of Afghan society as a whole. Afghanistan is, in the phrase often used of its obvious counterpart Ethiopia, ‘a museum of peoples’: a fragmented society ruled by an ethnically particularist royal elite, in this case drawn from the Durrani section of the Pushtun nationality. A modern nation in the ideological and material sense of the word has only begun to appear; the great majority of the population have owed primary loyalty to some tribal or ethnic sub-division, and have lived at subsistence level within isolated rural communities. As in North Yemen and Angola, the persistence of tribal divisions among much of the population can act as a potent base for counter-revolutionary endeavours. Whatever kind of régime the pdpa is able to construct in Afghanistan, it will take decades to overcome the fractured structure of that society and to realize its material potential: at best, Afghan socialism will be constructed to a degree rare even in the history of twentieth-century struggles within the brutal realm of necessity. But despite the grounds for caution, it is undeniable that a social revolution is being attempted in Afghanistan: its singular importance must not be occluded by doubts about its potential or the sparsity of the information as yet available to us.footnote4 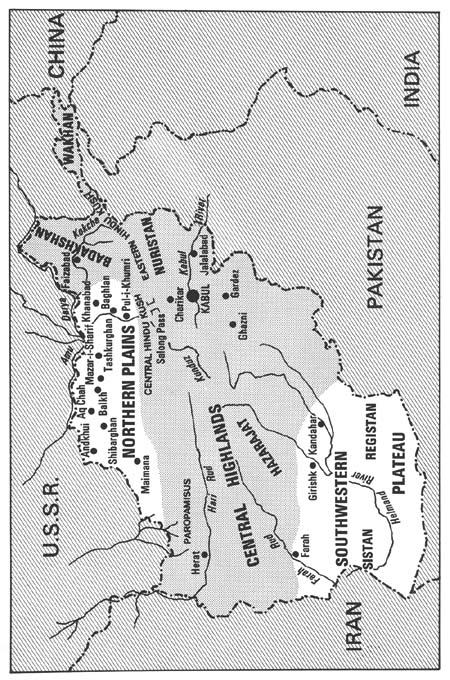 Afghanistan occupies an anomalous place, historically and geographically, in the third world. Historically, it was one of the very few countries not to be subjected to colonial rule, and like its counterparts in this respect—Ethiopia, North Yemen, Saudi Arabia, Iran, Nepal, Thailand—this enabled pre-capitalist socio-economic structures to survive longer than was the case in countries more directly subjected to the onslaught of capitalist expansion. At the same time, the struggles through which Afghanistan did succeed in resisting European (i.e. Russian and English) pressures generated a nationalist sentiment in the country which bore many similarities to that in countries which were subjected to direct colonial rule. One important difference, however, was that the supposed champions of the national cause were the Afghan monarchs themselves who, as in Ethiopia and North Yemen, were able to use their role in the anti-Western struggle to consolidate the pre-capitalist relations prevailing in the country and hence to postpone the era of socio-economic transformation. In North Yemen and Ethiopia, social changes were blocked until, with the ferocity of long suppression, popular upsurges swept the feudal régimes away in the revolutions of 1962 and 1974 respectively. Now Afghanistan too has undergone a similar explosion, with all the force—and some of the confusions—already seen in those two earlier revolutionary upsurges.