The Greek Elections and the Rise of PASOK

The Greek general election of November 1977 has not only brought profound changes in the political map of Greece, it has also resulted in a configuration of political forces which is unique in the context of European politics. For Greece itself, the exceptional significance of the elections lies in the fact that the ‘liberal versus conservative’ cleavage within the bourgeoisie, which has dominated most of the country’s parliamentary history, has finally given way to a more profound class polarization. For the first time since the Civil War, one can now speak of class divisions having a real reflection in the composition of parliamentary blocs. For Andreas Papandreou’s Panhellenic Socialist Movement (pasok), the major victor (in relative terms), has by its partial mobilization of the rural population and the urban petty bourgeoisie seriously challenged the traditional political formations of the Greek ruling class with their inter-class support. Moreover, the combined electoral forces of the Left gained some 38 per cent of the vote; this means that the possibility can be seriously envisaged that in the not so distant future the Left may come to governmental power through parliamentary procedures (provided, of course, that the army does not step in to interrupt the process). Such developments immediately bring to mind the comparable possibilities in France, Italy and Spain. However, as I shall argue below, the electoral failure of the (Eurocommunist) Communist Party of the Interior, and the presence of strong populist elements in pasok, give a very distinctive profile to the left-wing forces in Greece, different from those to be found elsewhere in Europe.footnote＊

Despite its comfortable majority in Parliament, Karamanlis’s right-wing ruling party New Democracy (nd) decided to organize the second parliamentary elections since the fall of the Junta well before the expiry of its four-year mandate in 1978. The official reasons given for this precipitate move were that such fundamental national issues as the ongoing eec negotiations and Greece’s differences with Turkey could only be dealt with effectively by a government enjoying a renewed popular mandate. However, the real reason seems to have more to do with the government’s calculation that the economic situation—which after a partial recovery from the 1974 world crisis had entered a new phase of recession after March 1977—could not but deteriorate further in 1978, given among other things the increasing unwillingness of private capital to step up its very low rate of investment.footnote1

Whatever the reasons which made Karamanlis decide on an early election, his expectation of maintaining or even increasing the vote he had won in 1974 was rudely shattered by pasok’s unforeseen advance. Before proceeding to analyse or interpret the election results, an overall picture is needed of the distribution of votes as compared to 1974; this is given in Table 1. (It should be noted that there is an important discrepancy between the distribution of votes and that of seats, due to the complicated system of ‘reinforced proportional representation’, which powerfully favours those parties getting more than 17 per cent of the total vote.)

The salient features of the 1977 election results, as Table 1 at once makes clear, are: 1. the relative shrinking of nd, which benefited not only pasok but also the extreme right-wing Nationalist Front; 2. the spectacular advance of pasok and the drastic decline of Mavros’s edhk, the liberal centre party; 3. the rout of the Alliance of Progressive and Left-wing Forces (within which the Communist Party of the Interior was the major partner), and the dominance of the (Moscow-orientated) Communist Party of Greece over the traditional Communist Left as a whole.

Let us start our analysis from the left of the political spectrum. It is well known that since 1968 the Greek communists have been split into two parties. The Communist Party of the Interior—cp(i)—has affirmed its independence from Moscow and adopted a Eurocommunist line, while the Communist Party of Greece (exterior)—cpg—remains faithful to Moscow. In the 1974 elections the two parties nevertheless collaborated, together with eda, under the banner of the United Left.footnote2 But in 1977 the cp(i) and eda, together with three other small centre-left parties,footnote3 established the Alliance of Progressive and Left-wing Forces, in an attempt to draw votes both from within and from outside the camp of the traditional Left. 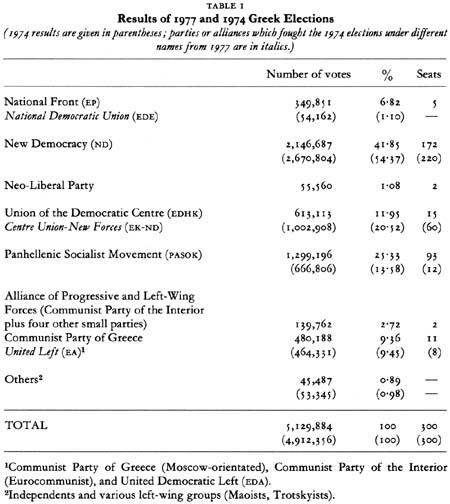 If one looks first at the overall vote given to the cpg plus the Alliance (about 12 per cent), it becomes obvious that in terms of the record prior to the 1967 dictatorship the communist performance has not been very impressive. It is true that in the first post-dictatorship elections of 1974, the United Left only won 9·45 per cent of the vote; but this was under exceptional circumstances, in that the slogan ‘Karamanlis or the tanks’ persuaded a considerable number of voters from all parties to give their support to New Democracy. Since the ‘tanks’ bogey had lost its force by 1977, the mere 2·5 per cent increase in the overall communist vote means that—under ‘normal’ circumstances this time—the pre-dictatorship level of electoral support has not been reached (in 1963, for example, the communists won 14·5 per cent of the total vote). In other words, despite the general radicalization resulting from the seven years of dictatorial rule, a certain proportion of pre-dictatorship support for the traditional Left has switched to pasok and other parties.footnote4 (In fact, however, the really significant drop in the communist vote took place before the dictatorship, between 1958—when the communist-dominated front eda got 25 per cent—and the 1961 elections, when it only got 14·65 per cent. Although this collapse of the traditional left-wing vote could partly be attributed to the fact that the Right, terrified by the 1958 electoral results, had mobilized the State and para-State apparatus against left-wing supporters, there is no doubt that the main factor was the unification and rise of the Centre under George Papandreou.)

At all events, the major shift affecting the shrinking communist electoral redoubt on this occasion came neither from new recruits nor from any further exodus, but rather occurred internally. It took the form of a dramatic defeat for the Communist Party of the Interior. The figures show very clearly that not only did its Alliance fail to attract voters from outside the sphere of the traditional Left, it also lost communists who had voted for it in 1974 to the cpg. This becomes evident from a look at electoral areas where the cp(i) did relatively well in 1974 (for although in 1974 the cpg received more votes on the national level than the cp(i) plus eda, in some areas the latter contributed a majority of the votes given to the communist electoral alliance). For instance, in the province of Kavala the overall communist vote did not change much from 1974 to 1977, remaining around 11 per cent. In the 1974 elections, the cp(i) plus eda received more than half of these votes; in 1977, the situation was reversed with the cpg taking two thirds. Or to take a dramatic local example, in the left-wing village of Mesotopos on Lesbos island the overall communist vote was 434 in 1974 and 437 in 1977; of these, the cpg share was 128 in 1974, but 434 in 1977.footnote5

Walter Benjamin
Surrealism: The Last Snapshot of the European Intelligentsia