Is US Imperialism Resurgent?

The Petras and Rhodes article in nlr 97, ‘The Reconsolidation of us Hegemony’ argues that, contrary to the view of many, the United States is not on the decline as a world power. It states: 1. that although the usa suffered some relatively minor setbacks around 1970, it has now pretty much recouped its position of world hegemony; 2. that Europe and Japan are on the decline vis-`-vis the United States, in good part because of the fact that the us working class is more ‘docile’ than that of its competitors. A careful examination of the evidence, however, refutes the Petras-Rhodes claim of a reassertion of us world hegemony.

As the authors recognize in their article, the world export postion of the United States has consistently been declining since the early fifties. Moreover, in the period 1970–74 the rate of decrease in its share of world exports has been increasing. While in 1963 us exports represented 14·9 per cent of the world’s total, in 1970 they represented 13·6 per cent and in 1974 11·5 per cent. While in 1963 us exports totalled 44 per cent of those of all the countries now in the Common Market, in 1970 they were 38 per cent, and in 1974 35 per cent. The relative trends in world exports are reported in Table 1. The authors suggest that the export position of the United States is the only major factor which has continued to decline in relation to the rest of the world. Far from this being the case, the relative us decline is revealed in a whole array of basic statistics.

The rate of growth of various countries of the world are reported in Table 3, where growth in the period 1965–70 is compared with growth from 1970–75. From this table it can be seen that the only major countries which the United States overtook in growth rates between the two periods were West Germany and Switzerland. Its overall rate of growth, together with Britain’s, remained one of the slowest in the entire capitalist world. Hardly the mark of a resurgent economic power. 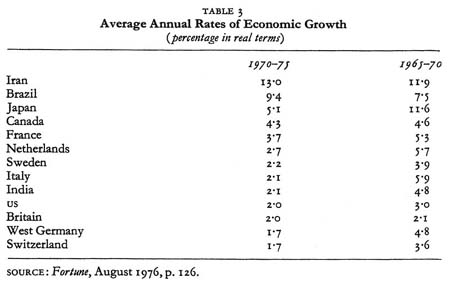 The growth rate differentials are, in good part, in turn a product of the differential rates of growth in labour productivity. While from 1965 to 1975 the us output per man hour increased to only 115 per cent of what it had been ten years before (in 1972 the output per man hour was actually higher than in 1975), that of the Japanese increased to 231 per cent, the Swedish to 178 per cent, the West German to 165 per cent and the French to 158 per cent (see Table 4).

Again, this is hardly the mark of a resurgent economic power. While the United States might have been temporarily able to slow the decline in its overall international position by keeping real wages constant in the period 1965–75, and thereby considerably cheapening the cost of its production in comparison with that of its economic competitors, such a solution can only be a temporary one, which eventually will reach its limits. Only improvements in technology and organization of production can provide a firm and lasting basis for rapid economic growth.

The declining economic position of the United States is also reflected in the international position of its leading corporations. For example, while in 1965 76 per cent, and in 1970 64 per cent, of the world’s fifty largest industrial corporations were American, in 1974 only 48 per cent were of this nationality. (See Fortune, May and August, 1975).