In April 1971 a revolutionary insurrection exploded in Ceylon. Unanticipated by imperialism, and unexpected by revolutionaries elsewhere, sections of the rural masses rose in organized rebellion against the very government they had voted into power in the previous May. This upsurge marks a totally new phase in the hitherto relatively tranquil history of the Ceylonese state. But the insurrection also has an importance far beyond the coasts of Ceylon itself. A brief resumé of the political situation in which it exploded will indicate its astounding and unique character. The government against which the people rose had come to power on a verbally ‘anti-imperialist’ and ‘socialist’ platform, and included representatives of the pro-Moscow Communist Party and the ex-Trotskyist Lanka Sama Samaj Party. It was generally regarded in imperialist circles as a dangerous and dogmatically left-wing régime. Secondly, the resistance to this government did not take the form of fragmented and spontaneous resistance, nor of organized strikes, nor even of initial low-level guerrilla actions: it assumed the form of a widespread armed insurrection, the most advanced and most complex from of all revolutionary combat. Moreover, the organization which led this insurrection, the Janata Vimukhti Peramuna (People’s Liberation Front), had an extremely unusual political origin and formation: it had developed as a split on the left from a pro-Chinese Communist Party. After working in clandestinity for five years before emerging in the election campaign of 1970, and after a further year of public work subject to constant harrassment, it was able to marshal thousands of insurgents against the Bandaranaike régime. Finally, the international line-up of support for the Ceylonese Government represented a wider and more advanced degree of international counter-revolutionary intervention than has been seen anywhere else to date. Within a few weeks of the outbreak of the insurrection, the Ceylonese bourgeois State had received military aid from the us, Britain, Australia, Russia, Yugoslavia, Egypt, India and Pakistan; and economic aid and political approval from China.

The Ceylonese insurrection was also strategically of great significance for the revolutionary movement in Asia as a whole. In the past twelve months, Great Power rivalry in the Indian Ocean has been on the increase, while popular wars in the Gulf (Oman) and Eritrea have consolidated and advanced. The Ceylonese insurrection came a month after the defeat of the invasion of Laos, and coincided with the popular resistance to Yahya Khan in Bengal. It thus formed part of creeping social conflagration throughout the Asian continent and represented the opening of a new social revolutionary front, in between East Asia and West Asia, at a nodal point where the economic and strategic interests of imperialism had previously appeared to be secure. It is not yet possible to give a full analysis of the Ceylonese events of this year: they are still too close. What follows is an attempt to grasp the specificity of recent Ceylonese history, and the nature of the present economic and social crisis in the island, which gave birth to the jvp and the astonishing insurrection of April 1971.

Ceylon is a small tropical island, of some 25,000 square miles, separated by a narrow defile of water from the Indian subcontinent. It is divided into different regions by both topography and climate. The whole coastal rim, and the northern and eastern interior, form a flat lowland; in the south-centre, however, a high massif rises sheer above the plains to dense, forested peaks of over 7,000 feet. Overlapping this division is an extremely sharp climatic contrast between a triangular wet zone in the south-west corner of the island, with heavy rainfall, fertile land and irrigated cultivation, and a dry zone haunted by drought and scrub, which occupies the whole of the north and east of the island. In the early pre-colonial epoch, much of this was watered by extensive hydraulic systems, and formed the homeland of the Ancient Sinhalese kingdoms which vied with the Tamil states in the far north of the island. The network of tanks, dams and canals had, however, fallen into disuse and decay well before the arrival of European conquerors; and, as a consequence, the centre of Sinhalese culture and society had shifted southwards to the highlands of Kandy in the south-west. It was in the latter zone that cinnamon was collected wild in the jungles: this 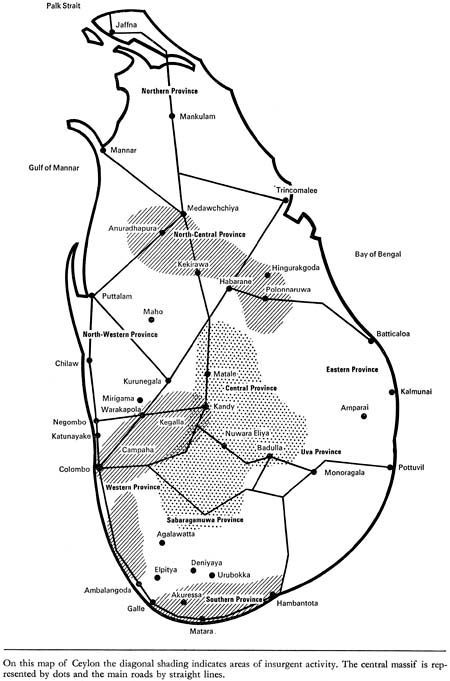 spice became the first object of Portuguese plunder in the 16th century.

Ceylon underwent a longer historical experience of colonization than any other country in Asia. It bears the marks of this past—some 450 years of European domination—to this day. The Portuguese invaded the island in 1505, and rapidly conquered the coastal lowlands, isolating but not subjecting the Kandyan kingdom in the fastnesses of the south-central highlands. They established a rudimentary but effective trading control over the island, exploiting it for the collection of wild cinnamon, of which Ceylon then had a world monopoly. In the succeeding 150 years they also succeeded in converting a relatively high proportion of the Sinhalese population in the south-western coastal strip, centred on Colombo, to Catholicism, thereby dissociating them both culturally and economically from the Sinhalese in the beleaguered Kandyan uplands. A singular mark of the Portuguese impact on the low-country Sinhalese was their mass adoption of Lusitanian names. To this day, De Souza, Perera, and Gomes proliferate in the south-west: a phenomenon whose only parallel in Asia is to be found in the Philippines, where the Spanish monastic frailocracia achieved an even more spectacular success in formally converting and hispanizing the indigenous population. Portuguese rule, however, came to an end in 1658, when the Dutch seized their territories in the island in collusion with the Kandyan nobility, during the long Ibero-Dutch wars of the 17th century. The new rulers developed and modernized the economic system bequeathed to them by their predecessors. The Dutch cinnamon economy was now based on organized plantations, in which production was rationalized and yields increased. The blockade of the unsubdued highlands was tightened, and the social and political system of late Kandyan feudalism gradually disintegrated within the ring of Dutch forts and settlements which surrounded it. Holland was not interested in mass conversion of the local population, given the more pronouncedly particularist and racist character of Protestantism: but it did introduce the peculiar system of Roman-Dutch law which has survived in the island down to the present.

Another 150 years later, Ceylon underwent its third European conquest. Once again, it fell to a new colonial master as a by-blow of international conflicts within Europe itself. The formation of the Batavian Republic in Holland in 1795, ally and client of the Directory in Paris, led to a British attack on Ceylon as part of England’s worldwide counter-revolutionary and imperialist offensive against the French Revolution and its sequels. Kandyan feudalism collaborated with the British expeditionary forces as eagerly and short-sightedly against the Dutch, as it had with the Dutch against the Portuguese. Once the Dutch had been evicted, London proceeded to complete the unfinished work left by Amsterdam. In 1815, the British fomented a revolt by the Kandyan aristocracy against the last Kandyan monarch and marched into the uplands to depose him at their request. Two years later, when the same nobility rose against British rule in a fierce rebellion in which their villagers participated heroically, they were crushed by the occupiers they had themselves invited into their remote redoubts. Subsequent risings in the 1820’s and in 1848 were soon stamped out; a communications network was constructed to end the old inaccessibility of the uplands; and for the first time, colonial rule now covered the whole length and breadth of the island. The military and political preconditions had now been laid for a massive economic transmutation of the island. In the 1830’s, coffee was introduced into Ceylon, a crop which flourishes in high altitudes. Speculators and entrepreneurs from England swarmed to the new conquered uplands, and expropriated vast tracts of forest on the higher slopes of the Kandyan valleys from the villagers who had traditionally used them as common lands for fuel and fruit-gathering. The right to seize this land was ‘purchased’ from the British State at nominal prices: it was then cleared and converted into enormously profitable coffee plantations. The Kandyan villagers refused to abandon their traditional subsistence holdings and become wage-workers on these new capitalist estates. Despite all the pressure exerted by the colonial State, they could not be broken into the mould of a plantation proletariat in the 19th century. British imperialism thus had to draw on its limitless reserve army of labour in India itself, to man its lucrative new outpost to the south. An infamous system of contract labour was established, which transported hundreds of thousands of Tamil ‘coolies’ from Southern India into Ceylon for the coffee estates. These Tamil labourers died like flies, both on the journey itself, and in the nightmarish conditions of the early plantations. footnote1 Nearly 1,000,000 were imported in the 1840’s and 1850’s alone: the death rate was 250 per 1,000. The decimation and super-exploitation of this class founded the fortunes of British imperialism in Ceylon. The creation of this vast immiserated mass not only generated the surplus-value pumped regularly home to London: it divided the oppressed population of the island as well, allowing the colonial state to manipulate and exacerbate ethnic antagonisms between Tamil and Sinhalese in a classic strategy of divide and rule. The coffee economy collapsed in the 1870’s, when a leaf disease ravaged the plantations. But the economic system it had created survived intact into the epoch of its successor crop. In the 1880’s, tea was introduced on a wide scale and soon had ousted coffee completely. The main social alteration to which this led was not in the structure of the labour force, which remained as before composed of contracted Tamil coolies, but in the nature of the entrepreneurial units. Tea was more capital-intensive and needed a higher volume of initial investment to be processed. The result was that individual estate-owners were now supplanted by large English consolidated companies based either in London (‘sterling firms’) or Colombo (‘rupee firms’). Monoculture was thus increasingly capped by monopoly within the plantation economy. The pattern thus created in the 19th century has remained essentially identical ever since: Liptons and Brooke Bonds rule the Ceylonese massif down to this day. The only significant modifications to the colonial economy were the addition of a rubber sector in the foothills below, and the enlargement of coconut cultivation in the coastal region near Colombo. These three crops, in descending order of importance, henceforward dominated the island’s commercial agriculture.

Subscribe for instant access to all articles since 1960
Buy the print issue (with instant online access) for £8
Buy this article for £3
Shouldn't I have access to this article via my library?
Bob Rowthorn, ‘Imperialism in the Seventies--Unity or Rivalry?’
En-Lai Chou, ‘Letter to Sirimavo Bandaranaike’